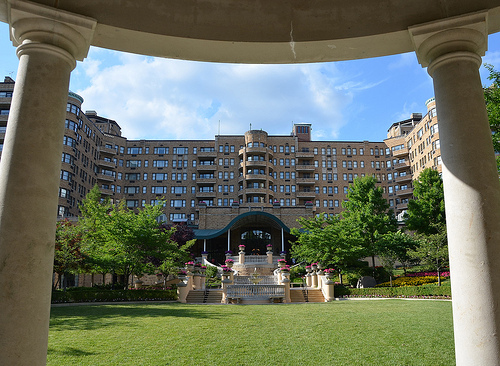 [Photo of the Omni Shoreham Hotel by Adam Fagen]

CURBED MAPS — It's Hotels Week over at Curbed and we've mapped out Washington D.C.'s 38 Essential Hotels. We also have maps of the DMV's newest hotels and its most anticipated hotels.

HOTEL WEEK (FIVE STARS) — We took a look at some of D.C.'s historic hotels and some of our favorite hotel lobbies. Plus, we're polling our readers as to which hotel has the better fitness options and outdoor pool.

HOTEL WEEK (ONE STAR) — D.C.'s hotels also have a long history of scandalous occurrences, which we documented. Spoiler alert: Marion Barry's name comes up a lot. As for current hotel snafus, we ran a power hour highlighting one and two star reviews of local hotels that we found on Yelp. There was everything from mushrooms in the wallpaper to terrifying architecture and wake-up calls from both protestors and haunted fire alarms. Finally, don't call these hotels looking for a room: they're hotels in name only.

COLUMBIA HEIGHTS — This three bedroom condo is available for rent or for sale, and it's some of the best condo eye candy we've come across in awhile.

SHAW — D.C. developers are talented at converting any type of building into living space, but when they changed this fire house (which is now for sale) into apartments, was it really necessary to leave the pole in the upstairs hallway...without giving residents the opening in the floor to slide down?

LOGAN CIRCLE — The owners of the building that had hosted "men's parties" up until a patron's death in 2009 had asked for a permit to level the building but because it falls in the 14th Street Historic District, the neighborhood may block that permit.