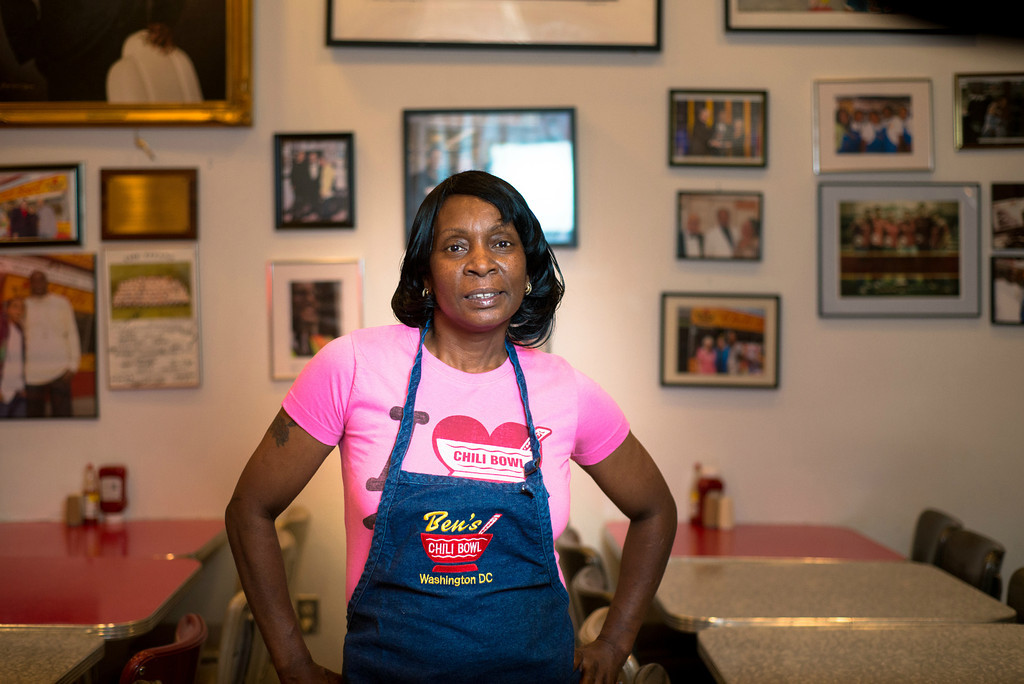 Bernadette "Peaches" Halton doesn't fuss over celebrities. Throughout her 35 years working at Ben's Chili Bowl, this breakfast manager has seen many coming in and out of the famous greasy spoon located in the heart of the U Street neighborhood.

"They're just like me, but they just make more money. That's all," she said.

The Alis, the past and present owners of the eatery, are the people Halton really gushes over. Especially Virginia Ali, the co-founder of the diner whom she describes as a mother figure. When asked about her most significant experience at Ben's Chili Bowl, she immediately brings up the massive U Street metro construction during the late 1980s that shut down the block for five years. She and the diner's matron were the only workers at the restaurant serving construction workers and hard core regulars.

As for Virginia's husband, co-founder and the diner's namesake, Ben, Halton calls him "pops." He showed her how to make the chili a couple of years after she started. She continues to whip up the popular sauce even as a shift manager since very few have been entrusted with the recipe.

For this month's Lifers, Halton talks to Eater about how she became a part of Ben's Chili Bowl family, her philosophy on how to treat people and what she wants for the restaurant's future.

How did you hear about Ben's Chili Bowl?
Just right after high school. I went to the job/unemployment bank. They recommended me to Ben's Chili Bowl. I came down here and I spoke to Ms. Ali. She looked at me and said: "You're kind of young to be working here late at night." I said, "Oh no, I'll be fine." So she gave me a chance. First, I was working the day shift. Then she put me on night shift. And I've been here ever since.

What was your first job here?
I started out as a counter person. A counter person is you do any and everything. You fix sandwiches, take orders. You stock up. You clean up. Whatever needs to be done. Two years later, I got pregnant. I worked until the day I had my son. I had him. I came back to work. Ben, the original owner, showed me how to make the chili. So I felt like I was moving up. I believe I was the daughter they never had. The way he talked to his sons, that's the way he talked to me. At first, I was feeling like "Why is he was talking to me like that?" That's the way he expressed himself. So I got used to it. I was on night shift for, I believe, 15 years. I came back on day shift. I was managing the day shift for, maybe, 15 years. Then I came on breakfast shift. That's when the real work began.

What do you mean by real work?
I make all the chili. All the chili. The person they had [doing the chili] retired. It fell on me because I was the longest serving employee. It was something to learn. I felt good about it because they trusted me with [the chili]. Now, I come at 12 every night. So of course I go to bed at 5 [pm]. I get up at 10 [pm]. Get ready for work. I come in. I start my process by doing my chili. Once I'm done with that, by 6 [a.m.], I manage the rush. Help my staff. That's my day.

What's the best part about being here?
[Everyone] is like family. To me, it's a friendly establishment. I know on my shift, when we argue it, takes up to five minutes. We still love each other.

I read that you usually don't get starstruck. According to Ben's Chili Bowl history book, it was a different story when you met Eddie Levert from the O'Jays. Can you tell me more about that experience?
I was at the back making the chili. Then Nizam [current co-owner] said, "Eddie Levert is here." I said, "For real?" I asked if [Levert] could take a picture with me. So he did. The reason why I did this is because I like their music. He and his late son, Gerald Levert. I love their music. That's why I was really happy to take that picture.

And normally you don't do that?
No. Only if it were a picture with Bill Cosby. He was the guest speaker at my son's graduation. He graduated from Delaware State. [Cosby] and Ms. Ali were there. He asked my son to stand, called my name and said: "Maybe that's where my tips went--to pay your college." [Laughs] It was really funny.

Looking back, what were one or two significant events that really struck you after being here for so long?
One of the events was when [the city] was building the [U Street] metro. It was just me and Ms. Ali. Because of all the construction, people couldn't really come in. And that's when I learned how to make over easy eggs, sunny side eggs. That's what [the construction workers] wanted for breakfast. Another thing, for each anniversary. [Ms. Ali], for birthdays and anniversaries, she always gets me something. She's like a mother to me. There's nothing I wouldn't do for her. I'm quite sure she feels the same way about me because I didn't raise my [two] kids by myself. My kids were raised here.

After being here for three decades, you've seen the dramatic changes in the neighborhood. What have these changes been like for you?
It went from a drug infested area to a middle class area. That was a big change, but the clientele here now is very different from when I first started. At one time, only African Americans came. Now everybody comes to Ben's. I'm going to treat everybody equally. My work will always be about that. Regardless what color of your skin, whoever was here first, that's who you serve. Don't do it because you want a tip. You do it because you care.

Was there a time when you wanted to leave?
Yea. I would get frustrated with [customers and workers]. They say they can find someone else. But who can they trust with their business?

Have you worked at other Ben's Chili Bowl locations or will you be working at the new H Street location?
No. What I really want is for [Nizam] to get me a kitchen and all I can do is chili. I'll have people working under me. He keeps saying he's going to do it, but that ain't never gonna happen.

Do you want me to add that?
Yea. [Laughs] Put something on this back. When you're opening up other stores, you need more chili. I can't do it all by myself. You need a bigger kitchen.
· All Ben's Chili Bowl Coverage [-EDC-]
· All Previous Editions of Lifers [-EDC-]
· All Greasy Spoons Week Coverage [-EDC-]