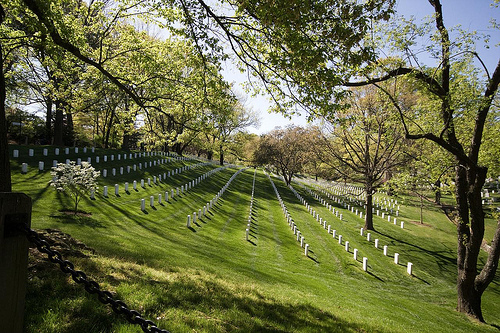 CURBED MAPS — We made a map of D.C.'s cemeteries. Find out which ones were made for Civil War veterans, which ones hold famous people and which ones are falling apart from neglect.

LISTS — Estately named Washington D.C. the number three city that chooses to live child free. This came as something of a surprise to us considering the plethora of entertainment options for kids (and just seeming plethora of kids!) but not to our readers who note the prevalence of college students and young professionals in the city.

CURBED COMPARISONS — We went very inexpensive with our rent this week — $600 per month — to see if there was anything available in D.C. that was not in a group house. Nope.

TENLEYTOWN VS. CAPITOL HILL — On the flip side, we raised the stakes for this week's Real Estate Death Match. We looked at available homes for sale around the million dollar mark. Which one

BUZZARD POINT — Somehow, in making deals for the land swaps to make the D.C. United stadium a reality in Southwest, a salvage yard called Super Salvage was overlooked. The city could, if need be, take the land via eminent domain, but where would a salvage yard even go if forced to move?

LANGDON — The neighbors complained and now the amphitheater has been struck completely from the design of the portion of Langdon Park that has been renamed for the godfather of go-go, Chuck Brown. This precedent could be bad news for the folks who want to add an amphitheater to the Walter Reed campus.

U STREET VS. PARK VIEW — We've realized that there are now two brand new sets of living developments named after legendary recording artists. Who did the better job naming their complex: the folks at Louis at 14th or the people whose facing apartment buildings are called The Otis and The Redding?

LOGAN CIRCLE — Interviewing new roommates is par for the course when moving into group houses, but these particular gentlemen require that potential new guys include a brief essay. Probably not a good fit if you a) don't like to write creatively or b) have never heard of Tinder.