Share All sharing options for: Romone Swinson on the Park Hyatt's Dining Evolution 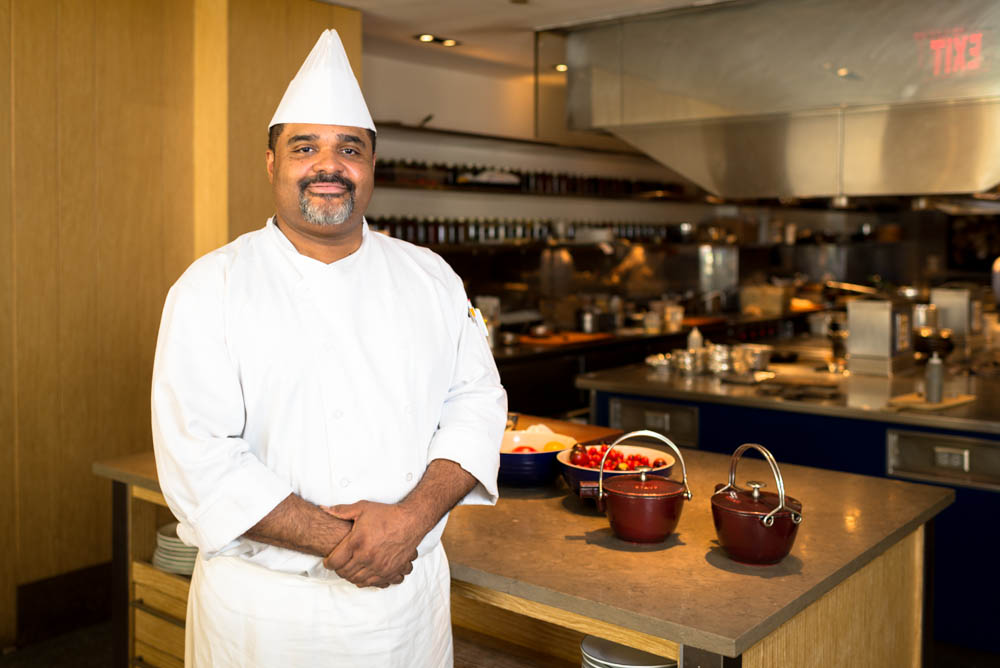 The West End's Park Hyatt has undergone several changes over the past few decades. For Romone Swinson, a banquet sous chef since 1988, he's welcomed those changes with open arms.

"Every stage has been different — almost like working in a different atmosphere without leaving the main site," said Swinson. The arrival of the acclaimed restaurant Blue Duck Tavern in 2006 was especially refreshing for Swinson. The D.C. native says he has seen a lot during his years working in the food and service industry, but the farm-to-table concept and the chic interior of this now award-winning restaurant just blew him away. He's also described the restaurant's recent changes, such as the addition of executive chef Sebastien Archambault, as positive and a "smooth transition."

In an interview with Eater, Swinson chats about cutting his culinary teeth at his sister's restaurant and working his way up to become a chef at one of Washington, D.C.'s finest dining establishments.

How did you get into the restaurant business?
Growing up as a kid, my oldest sister — we're 20 years [apart] in age — she had a restaurant business with her husband. I started working there [as] a young fellow, probably in my early teens. I worked there after school...That's how I really began.

What did you do at your sister's restaurant?
In the beginning, there was a lot of home-style food cooking — fried foods and macaroni. As I got older, I started making things like crab cakes and a little bit more upscale dishes. She would give me the freedom to do so just long as the customers were happy. I worked at a hotel during the daytime and then my sister's place in the evenings.

What jobs did you perform at your first hotel?
I started working at my first hotel in 1980. I started working as a steward, cleaning dishes. One day, someone called in sick and I just filled in for the garde manager department. I did that pretty well. The chef at the time [asked] me if I wanted to do that all the time. That's when I dropped the pots and pans and started making salads. From there, I started working in the pastry department. I was pretty comfortable doing that. And the same thing happened again with a winter storm. So many people couldn't make it to work. So then I had to cover the line. From there, I learned cooking a la carte. The chef then asked me if I wanted to do this. I said yes and that's how I got promoted to the ranks.

What led you to the Park Hyatt?
I worked in several small restaurants. One of them was a restaurant [nearby the hotel] in the 1980s, but it went out of business. The chef at that restaurant recommended me to come to the Park Hyatt. I talked to the chef here, and I was hired. I've been working here ever since. During that time, I continued working at my sister's place part-time. In 2000, finally, I gave up the work with my sister because she was going to retire. So I just solely worked at the Park Hyatt.

When you started working at the Park Hyatt, what did you do?
I was a line cook when I first started. I worked in that position for, I believe, three years. I was then the lead cook up until 1999. And then I was promoted to banquet chef. That was also the same time I stopped working at my sister's so I had a lot more time to work at the Park Hyatt.

Can you describe what you do as a banquet sous chef?
I produce and order all the foods that goes into a banquet menu. I execute and deliver every function, especially on the weekends when we have weddings, bat mitzvahs and other large parties. The timing, too, making sure the food goes out in time. I manage a staff of roughly 10 people, which includes the cafeteria staff of the hotel.

When Blue Duck Tavern first opened, what was your first impression?
I said, "Wow." The open kitchen concept and the decor with all natural wood was really, really pleasant. It was a nice atmosphere.

What's it like working with the new executive chef Sebastien Archambault?
It's been very good. It's been a nice, smooth transition. Lots of new ideas are coming out.

What's the best part of your current role?
The freedom and knowledge of knowing what is expected of me every day and what is expected of my staff — be able to produce it and execute every function to my satisfaction. That's why I particularly like [working in] banquets a lot because you know [what to serve in] advance.

Which type of parties do you enjoy preparing?
I would say the holiday parties where we'll have large groups having parties.
· All Blue Duck Tavern Coverage [-EDC-]
· All Previous Editions of Lifers [-EDC-]

A Modern Filipino Restaurant Rises in Annandale This Weekend