Welcome to Still Standing, where Eater looks at those bars and restaurants that have quietly stood the test of time over the years, despite the city's changing restaurant scene. From dive bars to neighborhood joints to under-the-radar haunts, these places rely on word of mouth and loyal regulars rather than splash and publicity to keep on going. 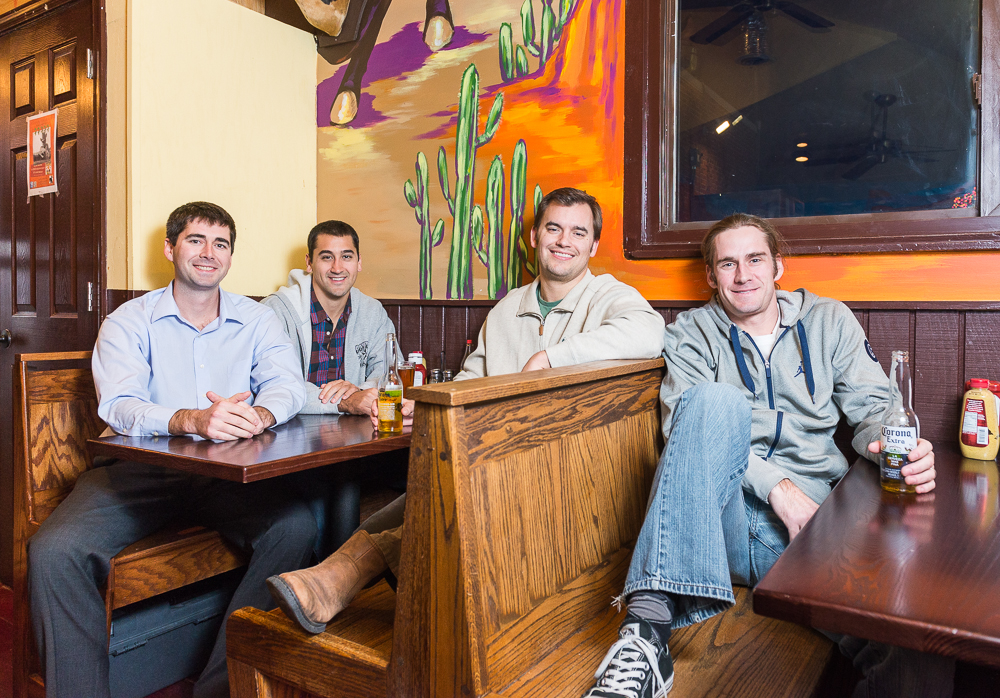 There's a mural on the wall of Arlington's Cowboy Cafe that encapsulates the current spirit of the longtime bar. The mural pictures the bar's previous owners: founder John Lange, later owner Charlie Campbell, plus recent owners Zac and Matt Culbertson. It also includes a longtime customers known as "Mayor Romey." The mural itself is bright and modern-looking, but it also shows an appreciation of the bar's history and a loyalty to those customers who helped keep the place running since November 1990, when it first opened its doors.

Finding that balance between old and new, changing things up while keeping regulars happy, has been the job of Cowboy Cafe's new team, which took over in 2011. They include owners Mike and James Barnes, Michael Danner and Wes Clough, along with longtime manager Erika Mendez. The team all has one thing in common: they spent some hours hanging at Cowboy Cafe, whether it was enjoying half-price burgers, getting in trouble in high school and college, or stopping by after shifts elsewhere.

Cowboy Cafe was first known as the Clam House, and made a transition to a chill bar with a slight Southwestern vibe with Campbell's purchase of the place. In the mid-90s, the current owners remember it as kind of a smoky biker hangout, with a cigarette machine and kitchy decor like license plates on the walls (those plates plus a mascot of an American Indian remain). One constant: beloved half-priced burger days, which the new owners remember as a fixture when they were in high school. "The burgers have been around since Charlie's era," said Mike Barnes.

Cowboy Cafe got its first taste of modernity when the Culbertsons purchased it in 2007. The family shared some traits with the Barnes family; they were former customers who grew up in Arlington and wanted to improve the place, with a more modern menu and new furniture. Their changes (which angered some regulars) lasted for several years. Meanwhile, the current owners were doing their own thing: franchising another beloved Arlington institution, Lost Dog Cafe, which now has three franchise locations outside of the Washington Boulevard original (if that Cowboy Cafe mural looks kind of familiar, it's the same artist as the one who designs those at the new Lost Dogs). But when the Barnes brothers heard the Culbertsons might be in the market to sell, they jumped at the chance to own a part of their own personal history. "I remember saying, I'm going to call up Zac Culbertson right now," said James Barnes.

The new team has instituted their own changes. Desperately needed: a remodeled bathroom ("It's no longer scary," James Barnes promises). They installed a new 14-tap beer system, which has led to a significant spike in business, and have been doing commercials for the first time. The walls were repainted, the back room was insulated, and brunch has become more kid and family friendly. Lines might not snake out the door down the street like they did during the heyday of half-priced burgers in the 90s, but business is good.

And some regulars like Romey have remained throughout all the changes. The team estimates the average age of customers to be more like 25 rather than 45 now, with more families and young professionals coming to the bar. It's also a popular after-hour hangout for industry folks. "We're not Clarendon and we like that," said Mendez. The bar smokes its own meat, pickles its own wings and makes a mean chili and pastrami. Popular draws have included "Sons of Anarchy" night, the new brunch and 50 cent wing night. It remains a beer and liquor bar — people are coming in for Jack and Cokes, not appletinis, the Barnes brothers explain.
· Cowboy Cafe [Official Site]

Know a place that should be featured in Still Standing? Toss us a note at dc@eater.com.
[Historical Photos: Facebook]