The first Old Fashioned Southern Efficiency's bar manager, JP Fetherston remembers drinking was made by Derek Brown, his now boss. Fetherston recalls being "amazed at the complex flavors in a simple thing" and fascinated by the history of the drink. Crediting this moment as the catalyst for his passion for cocktails, Fetherston became an incredible bartender in his own right.

So, it only made sense to recruit him to give us his personal take on the Old Fashioned, or what he calls "the blueprint of all cocktails". And because the Old Fashioned is the "truest cocktail expression of American whiskeys," Knob Creek® Bourbon is the ideal, bold base for his version. Using two different liqueurs, Fetherston's creates the perfect balance of sweet and bitter in this great American drink.

Fetherston begins by skimming off excess frost from the ice cube for his serving glass. Southern Efficiency orders large cubes from Favorite Ice Company, a service set up by a local DC bartender, Joey Ambrose. 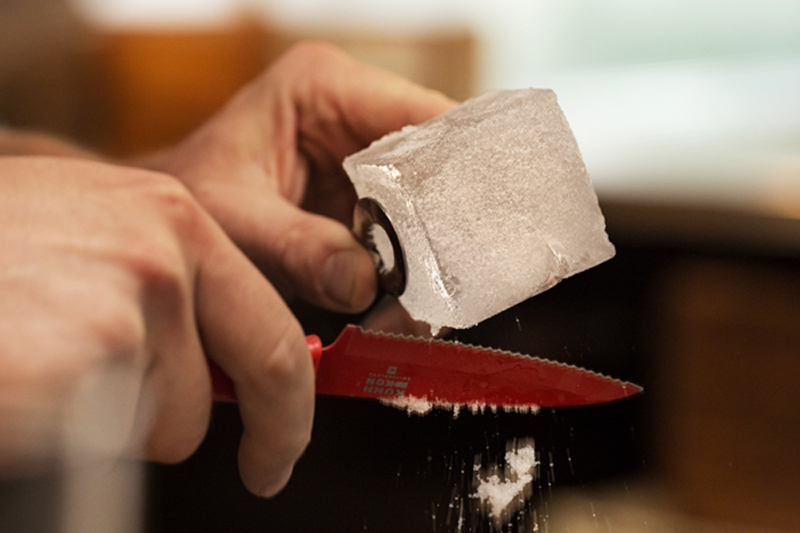 Before doing any cocktail mixing, Fetherston puts his hand-cut ice in the glass not only to temper, but to ensure that the cocktail goes right on ice to avoid any dilution. 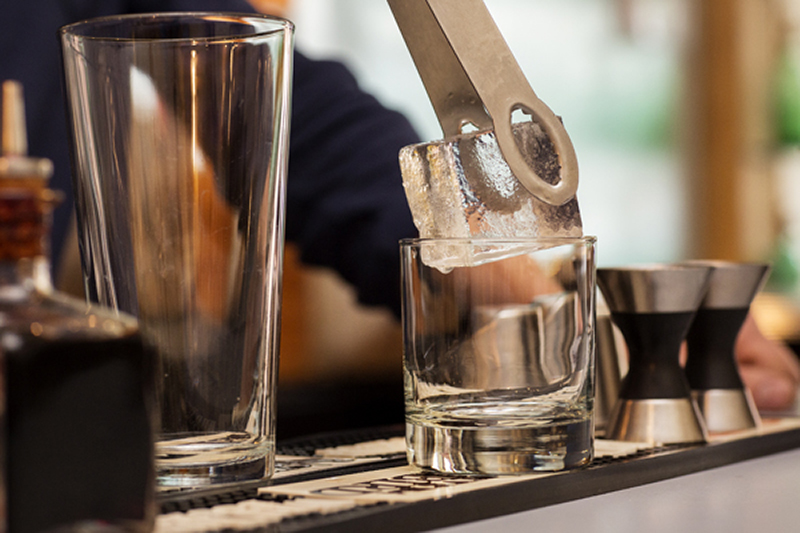 Fetherston uses more Knob Creek® Bourbon than usual recipes call for. For his cocktail, he ups the quantity to two and a quarter parts. This will help balance out the other elements he adds later. 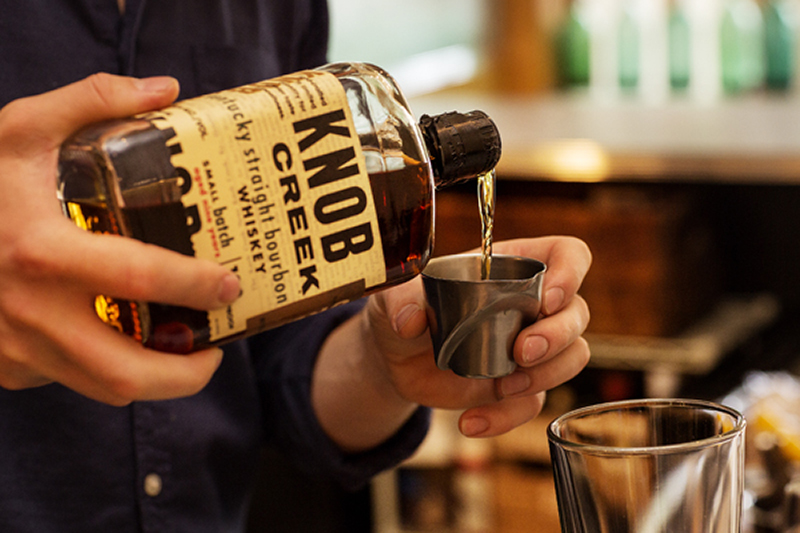 Because the small batch Knob Creek® Bourbon is aged nine years, there is, what Fetherston calls a "sweet and salty peanut brittle" flavor that he tries to highlight in the drink. 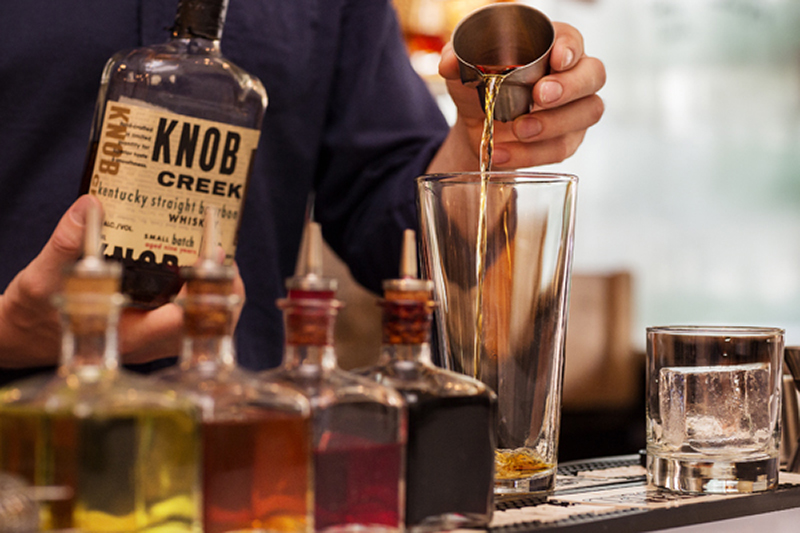 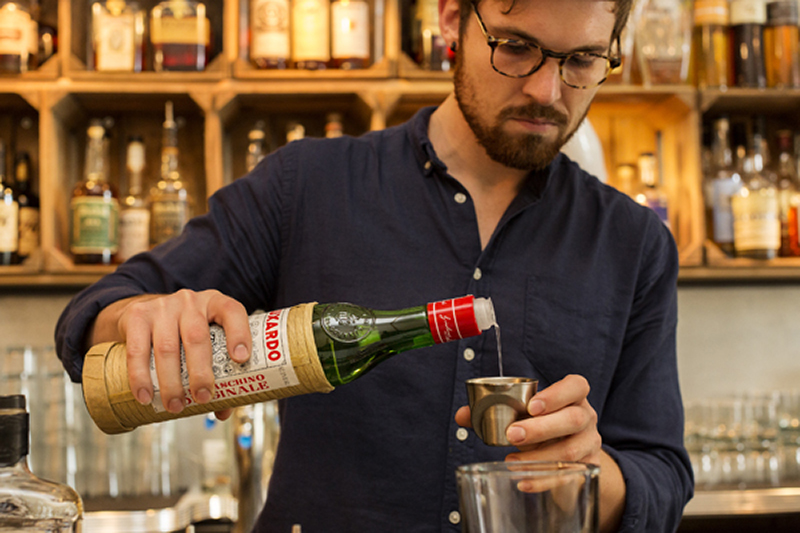 According to Fetherston, Royal Combier, a cognac-based orange liqueur, is an essential ingredient in his cocktail. This step adds more bitter, earthy flavors which are needed to balance the more sweet elements in the cocktail. 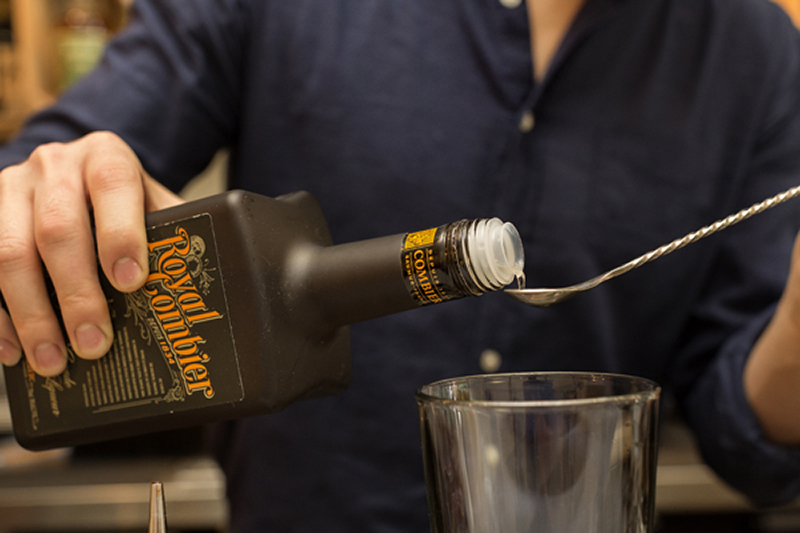 A few dashes of aromatic Angostura bitters are added. At Southern Efficiency, the bartenders decant their most commonly used bitters into bar bottles for ease and appearance. 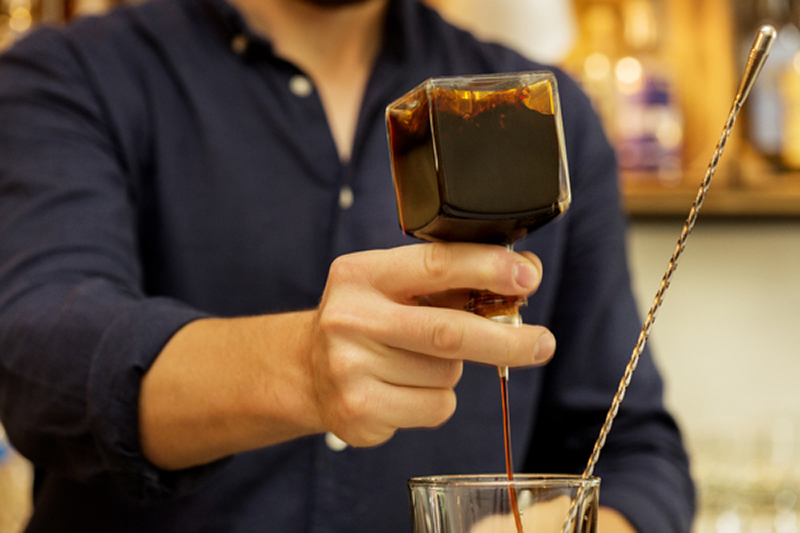 To balance the cocktail, Featherston adds a small bar spoon of rich simple syrup. He notes that the staff at Southern Efficiency find rich simple syrup (two parts sugar to one part water) preferable because "the syrup has a more viscous texture and lends more body to a drink. Raw turbinado cane sugar is used instead of processed white sugar, because it has much more depth of flavor." 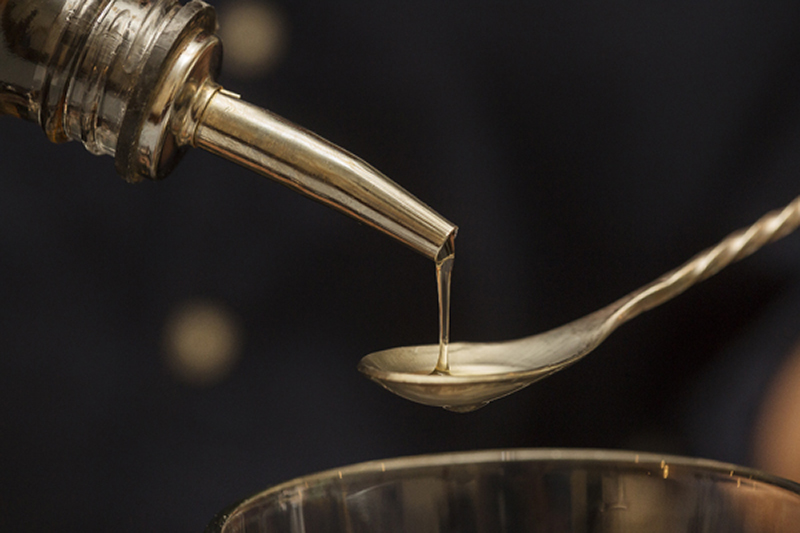 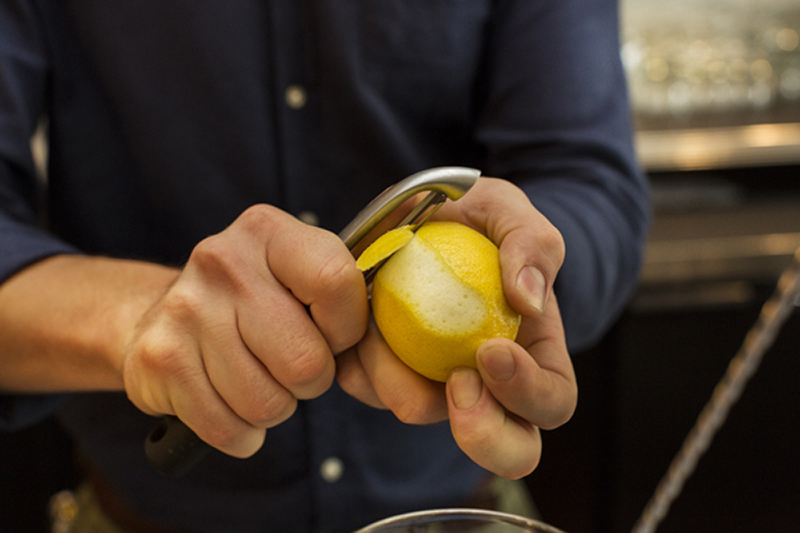 . . .and squeezes the zest on top of the mixed cocktail. 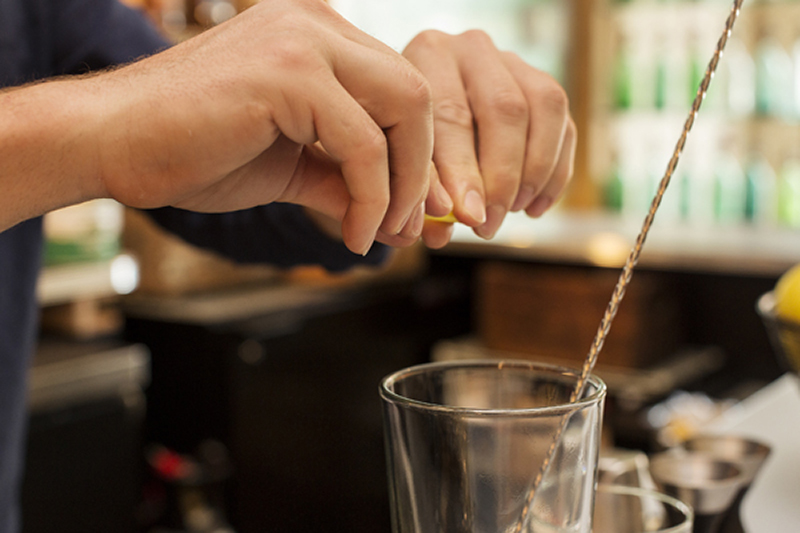 After squeezing the peel, he adds it to the glass to get the aromatic lemon oils directly into the drink. 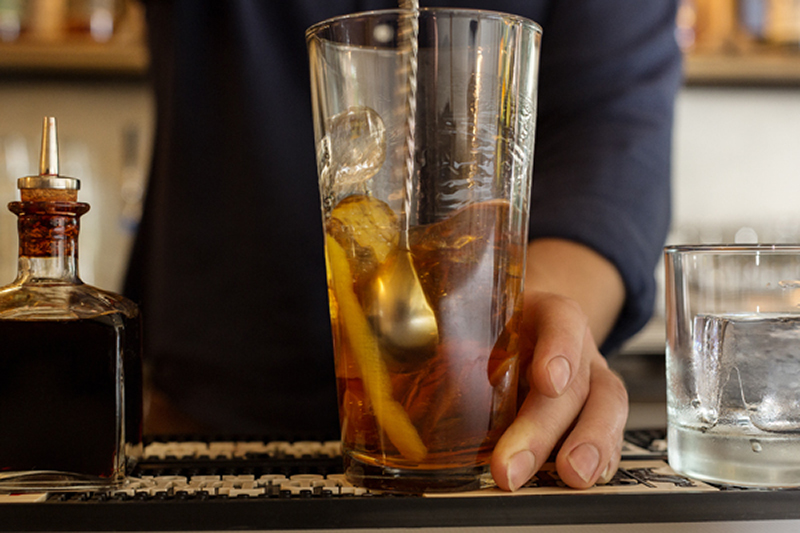 Using a barstrainer, he strains the cocktail over his prepared ice glass. 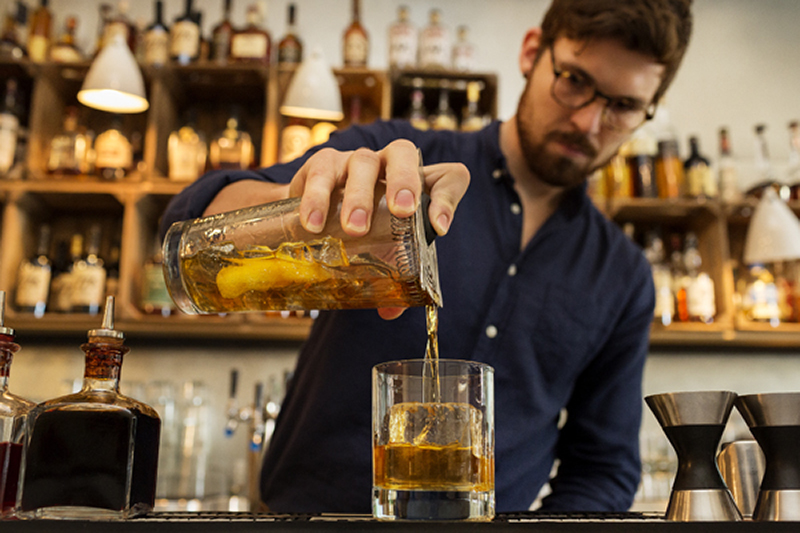 As a final garnish, he places a second lemon peel lovingly on top of the ice. 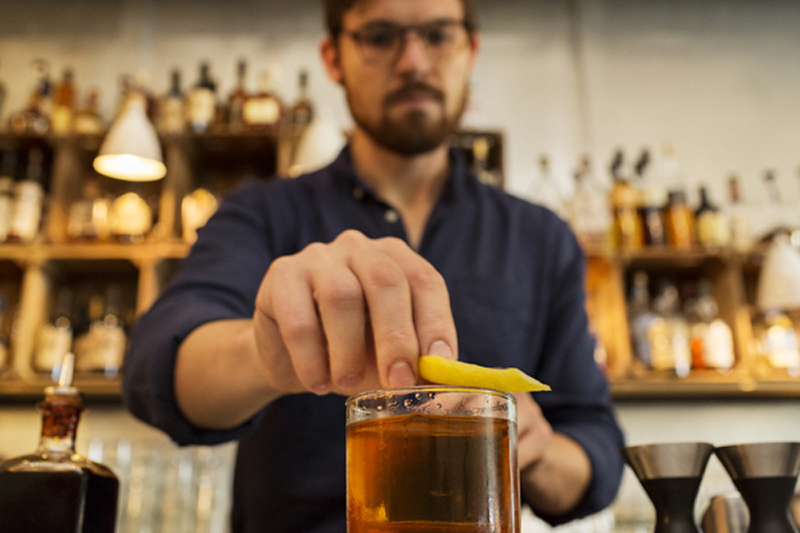 According to Fetherston, it is actually thanks to TV shows like Mad Men that the new cocktail boom started. And in D.C., there is certainly no doubt this boom brought excellent, unique takes on the Old Fashioned. The folks at The Pig muddle orange slices, brandied cherries, and simple syrup in a glass before adding Knob Creek® Bourbon. General Manager at Rose's Luxury, Andrew Limberg, says that they barrel-age the Knob Creek® Rye Whiskey with Luxardo Maraschino, orange, and aromatic bitters to give the drink extra depth. Trevor Frye at Rose's Luxury brings a dessert quality to his Old Fashioned by using brown sugar simple syrup, brandied cherries, and Jerry Thomas Own Decanter bitters to bring in an allspice sense.

With all of these different versions of the drink, there is one constant to make this simple, yet complex drink work: the big, full flavor of Knob Creek® Bourbon.