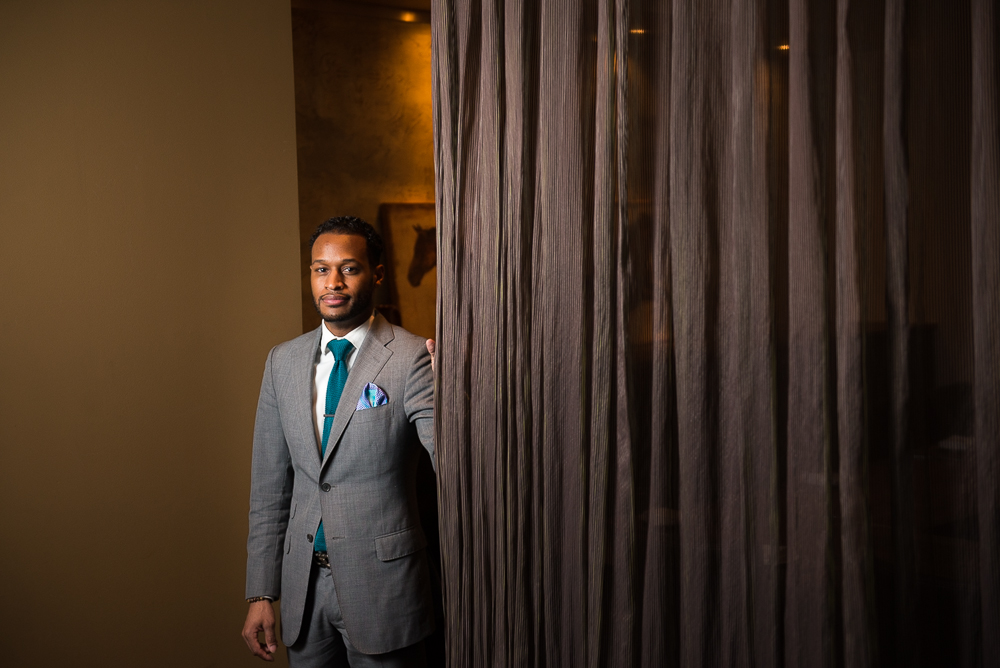 Critical acclaim seems to come pretty easily to chef Victor Albisu's Del Campo. This Penn Quarter restaurant has received some noticeable press and positive nods after less than one year of service. October was a particularly big month for the restaurant, says Del Campo's general manager Sean Webster. The restaurant was featured in The Washington Post's Fall Dining Guide and Esquire named Del Campo one of the best new restaurants of 2013. Since then, Webster has been trying to exceed those expectations. He says first and foremost it's about offering diners a unique and warm experience.

In this edition of Gatekeepers, Webster talks about some of the best seats in the house, where he dines when he's off-the-clock, and which notables have stopped in for a meal at Del Campo.

So what's the wait like on a Saturday at 7 p.m.?
Without a reservation it would probably be about a 30 minute wait. You know, like, most restaurants on a Saturday it's sort of our busiest time. We do around 300 covers that night so we always recommend a reservation. But we do keep a few seats open at our asado wine bar and at the bar, as well as our lounge area.

So tell me a little about that...
Well, I think it's a hidden gem. Our asado wine bar offers a full menu there and at the bar and in the lounge area. But the asado wine bar is really unique in that it gives you a bird's-eye view of the kitchen. Usually, Chef Victor will interact with the guests through the asado window, so it's really cool. We offer there wine flights, and something really cool, our Coravin specials, which are some of the rarest wines in the world that you can order by the glass. The asado bar seats nine people, and it's first-come, first-serve. You know, it's another area of the restaurant that's very interesting. It's almost like a reality television show, being able to watch and bring the diner right into the kitchen.

Are there other things aside from making a reservation for making the wait shorter?
The best strategy is to have a cocktail at the bar and enjoy the environment and the vibe. We are really big on creating a positive environment for guests to hang out and interact with each other.

And are there certain nights that are slower?
Towards the beginning of the week, Monday and Tuesday, are good days if you want to walk-in and get a quick table.

You had a big write-up last year in Esquire as one of the best new restaurants in 2013. What was the response like after that?
That happened in October, and October was actually a huge month for us. We were really honored to be mentioned by Esquire and in Tom Sietsema's Fall Dining Guide. With that although came expectations. They were much greater. That said, we had to work that much harder to exceed the expectations of guests coming in. The national exposure was great, and it furthered our reach. We're just trying to work to exceed those expectations of the guests coming in.

Were there other things that made October a particular busy month for you?
Oh yeah. as I mentioned before, Tom's review was very helpful and has helped us continue to gain traction. At the end of the day, it was all great. We love the positive feedback and D.C. is a place where that type of feedback is really a positive thing.

Some pretty big names have also rolled through your restaurant, like MIchelle Obama. Can you mention people who have been in for visits?
Mrs. Obama was huge. Obviously she's super gracious and everything you'd expect. We also had a couple of celebrities, including Ben Feldman from "Mad Men", the actress Kathleen Turner, and Chelsea Handler from E! Entertainment.

Any outlandish requests that you've received as a GM?
Honestly, no. We're in the business of making it happen, so I don't find anything too outlandish. At the end of the day, it's about making people happy. We do whatever is necessary to accommodate all guests.

Tell me about your favorite seats in the house, where those are, and any other good tables that people usually request?
I love our private dining space. It's in the back of the restaurant, and it's a little bit secluded. And, I love it when it's a party of like 20 people. They can have their own space, plus there's a big chandelier in the room. Victor spent a lot of time picking out the chandeliers. I like the setting back there. It has a really good energy. To get the room it does require a little work in advance. But, you just have to call us and ask us about it, and we can try to reserve it for a private party.

When you're not eating at Del Campo, when you're not working at the restaurant. Do you have a favorite table where you go eat?
I really enjoy going to Fiola. Fabio is someone who has a reputation for excellence. And it kind of makes me feel like I'm at home. It's the same thing Victor does here. He wants everything to be perfect. The same way Chef Victor does it, is the same way they do it. They care about the product, the food, and the service.

Last year was extremely busy for Victor. He opened Taco Bamba in Virginia. What has it been working with him?
It's been phenomenal. It's been a great experience. I've learned a lot from him. You know, he's not like an old guy. He represents the new guard in D.C., in terms of restaurants and starting something new and relevant. He wants everything to be excellent, and you can see that in his passion. The guy cares about every single thing, and it's great to work with someone like that. Because it makes you better, and it keeps you on your toes. I was literally the first person he hired. I've been with him since before the restaurant even had floors and chandeliers, or paint or anything. It's been great to see the restaurant grow and mature and evolve into something that is really an expression of his vision.

How did you two find each other?
I didn't know him at all. I knew he was the chef at BLT for a long time, but I didn't know him. The first time I met him was in my first interview. Immediately though, you understood his reverence for food and wanting to do something different. And, he really cares about doing things the right way. He doesn't just want to open a bunch of restaurants. He could do that, but he wants to do things the right way. Honestly, it pays to work for a guy with attention to detail.