Share All sharing options for: Daikaya's Owners on the Restaurant's Splashy First Year 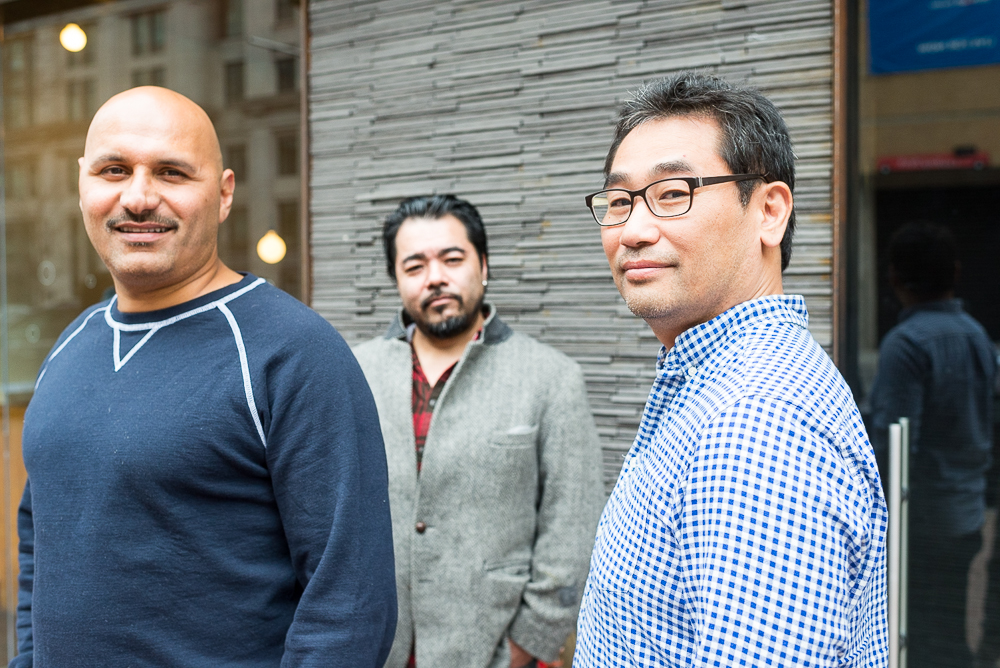 One of the most anticipated debuts in D.C. restaurants last year was Daikaya. The restaurant from Daisuke Utagawa, Yama Jewayni and Katsuya Fukushima opened in phases. First to come was the downstairs ramen shop, specializing in Sapporo ramen. Later came the upstairs izakaya, which combined cocktails, Japanese whiskey and experimental small plates in a traditional setting. Eater sat down with the three partners to hear how the restaurant has evolved over the past year or so.

Looking at both the ramen shop and the izakaya, were both busy right away? Has business ebbed and flowed over the first year?
Daisuke Utagawa: The ramen shop was a hit from the beginning. It's always been busy. If anything, the business has gotten stronger, due the fact that [in the beginning] customers didn't understand that there are different kinds of ramen. We serve traditional Sapporo ramen. But now we're bringing in regulars who crave it, as well as new people, and it's still very strong.
Upstairs, it took awhile. Number one, izakaya opened later. Number two, the door doesn't say anything. But now the word is out there. People love the concept of freestyle eating, and the concept is starting to catch on.

Will customers often hit both places in the same night?
D: A lot Japanese people will do two in one night. It's pretty common course in Japan to drink and eat at izakaya, and finish off the night with ramen. A lot of people wait for their ramen upstairs and think, "Oh we're here. "and eat upstairs, especially at the bar. From the beginning, we wanted to bring a slice of life in Japan to D.C. and two of the most ubiquitous forms of dining in Japan, as well as two of the most democratic and unpretentious [forms of dining] are ramen and izakaya.

What was the toughest part about getting the restaurant open in the first place?
Yama Jewayni: Getting the permit from DCRA. It was mind-boggling how challenging it was.
D: But at the same time we pulled it off.

Do you find that people are starting to understand the style of ramen you do, or are you still educating people?
D: We're still educating people, but I think we have to do it less. People's peers are taking to each other about it. But it's still in our greeting. We ask if people are familiar with Sapporo ramen at the start. We don't want their expectations to be something else.

How much has the menu changed over the past year?
Katsuya Fukushima: The ramen hasn't changed much, just because we we really wanted to focus on the basic ramens and the traditional Sapporo style, and not go too far out there, because we are still teaching people and explaining. We added the spicy miso, but that is still Sapporo style. And we added the spice bomb. That was kind of an, "If you can't beat them, join them" kind o f thing. People would come in and ask for a spicy condiment. So many people would ask for Sriracha. We're not Pho. They wouldn't believe that we didn't' have it. But as a restaurant, you want to give people what they want and still stick to who you are. So the spice bomb came out of that.
D: This way, we're doing it on our terms.
K: As fair as upstairs, as the seasons change and the produce changes, we change the menu. Some items have been very popular - the avocado is one. The brussels sprouts with pork belly are very popular. The other day we ran out of brussels sprouts because the deliveries got messed up because of the snow. I had to take some off the ramen line.

Along the way, you've added brunch and lunch upstairs. How have those performed?
D: Brunch is now successful. It's so different because in Japan, there is no brunch. This is an entirely new thing made up by Katsuya. We're gong to be changing up the lunch menu to add more things to it. At first we figured this was a business area, and that folks wouldn't have time to sit down and eat, and would want something quick. So we did donburi. And that has its own merits, and we like it. But people are saying that if they're going upstairs rather than [getting ramen], they are going to take more time, and want to order more. So we're looking to move things a little closer to the izakaya. I think that will begin on the 24th [of March].
Y: And we will also be open Sunday nights beginning the 23rd.

Were you happy with the critical reception the restaurant received?
D: I see a tremendous gap between those, I don't want to sound elitist, but those who understand what we do and those who don't. Those who don't understand tend to be very vocal on certain websites. That is a challenge to us, and people come in with different expect ions and then they're not happy. Some people come in with no expectations and that's really how it should be. But food is so personal. In general, the professional reviews have been very positive, and we're happy with that.
Y: We've been thrilled, honestly, and blessed. We've made all these different lists.

It seems you've gotten a lot of positive feedback on the restaurant's design [by Edit Lab at Streetsense].
Y: Thank you. A lot went into the opening design.
D: It was a gamble. It's very unusual for a restaurant to have full control over the exterior and interior of the building. Our landlord Douglas Development was very forward thinking. It's very Japanese inside and out.
Y: If we didn't last [as tenants], I don't think you're going to be putting a Chipotle in here.

Well, maybe a ShopHouse.
[Laughter]
D: Like with any restaurant, there are good and bad reviews. Tom [Sietsema's] review. We were blown away by that.
K: Well, the first one.

Have any famous guests come in during the first year?
D: One thing we try not to do is let people know when [famous] people here. It's sort of our policy to respect their privacy.
Y: We've had some high profile administrative people come in.

What are some changes to expect, looking forward?
D: I think we're going to do some events around the Japanese holidays. That can be kind of fun...We'll have some interesting dishes coming out. We're going to do summer noodles. Ramen is hot, and we'll see a drop off [in business] for about a week when the weather warms up. We have a lot of ideas, but I'm not sure how many will end up happening.
Y: Oh, we are amping up our beverage program. There's a separate Twitter handle for it now (@daikayabarlab).
Y: Have you heard the japanese term kaizen?

I don't think so.
D: It means constant improvement.
Y: Small incremental changes. That's what we're focused on.
· All Previous Daikaya Coverage [-EDC-]
· All Previous Editions of One Year In [-EDC-]