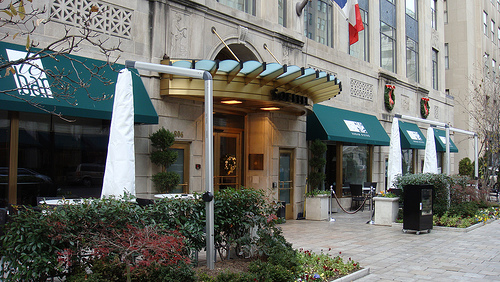 HOTELS WEEK 2014 — Curbed DC has celebrated Hotels Week by determining the eighteen most essential hotels in the city and rounding up the hotels that we're anticipating in the next few years that could become essential hotels later.

FOGGY BOTTOM — George Washington University has announced that the name of their new dorm will be District House. Here are some better alternatives.

HOTELS WEEK 2014 — Take a look at a few hotels that could have been and other D.C. hotels that are long gone.

HOTELS WEEK 2014 — Here's a map of hotels with a scandalous history. Meanwhile, no one has disproven our theory that the Allen Lee Hotel is currently D.C.'s sketchiest hotel.

U STREET — New condo building The Shay has released some new renderings of their pool and common areas.

HOTELS WEEK 2014 — You have options to save or splurge in D.C.'s most hotel-heavy neighborhoods. Regardless, several of the city's hotels give away cool freebies.

WATERFRONT — Learn about the architecture of Arena Stage with these cool factoids.