Share All sharing options for: Barcode's Manager Talks Bottle Service on a Budget 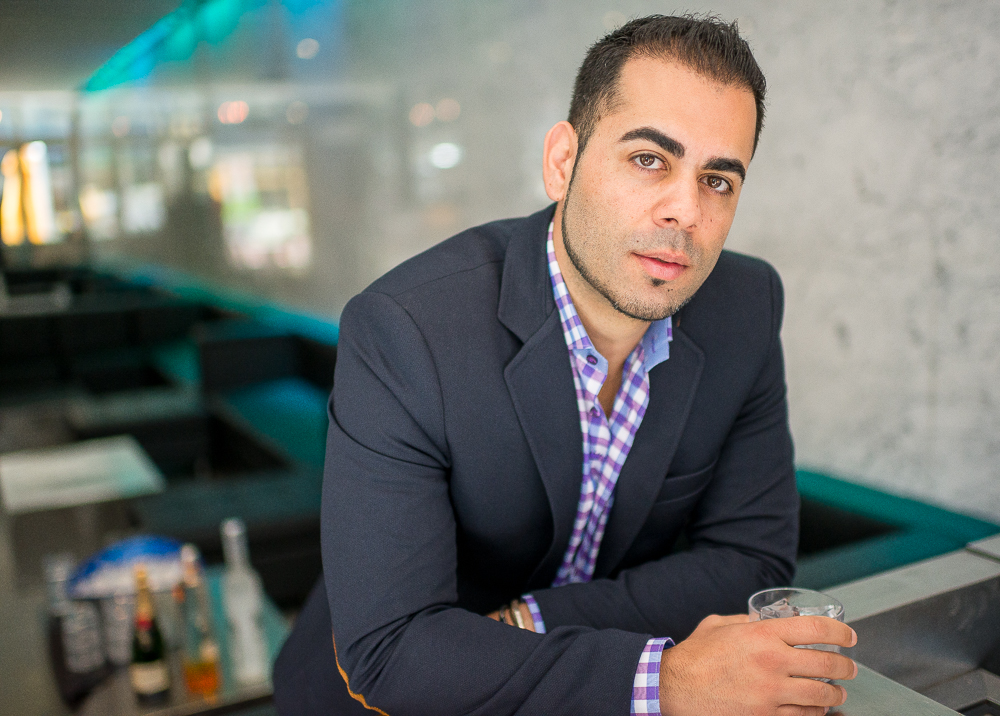 Since Barcode opened in November 2010, Stephanos Andreou has been the man helping late night revelers make the most of their time at the restaurant and lounge on 17th Street. And as one of the few D.C. lounges with a food menu just as extensive as its drink selection, Andreou and Barcode cater just as much to diners as they do to partiers. In this edition of The Ropes, Andreou chats with Eater about big names at the club, DJ proposals and getting bottle service on a budget.

How long have you been the VIP manager at Barcode?
I've been at Barcode since we opened, about three and a half years ago. I work mostly in the nightlife part — the events, promotions and marketing.

How did you get into the whole nightlife line of work?
I always liked hospitality. Hospitality is a big thing in Greece. I love people. I love to see them be happy. It comes natural to me to make them feel at home at my home.

So, you're originally from Greece?
Well, I was born and raised in Cyprus, so I'm Greek Cypriots.

Do you have regular VIP clients at Barcode?
We have a lot of regulars. Customers loves us and they tend to get addicted to our establishment. A lot of them come almost every weekend. We consider them all to be part of us.

Unlike a lot of other lounges in D.C., Barcode seems to focus on the food and dining aspect just as much as on music, drinks and nightlife. What do you find is the split between people who come for the food or people that just come to party?
I would say it's equal. The restaurant and the party, lounge aspect are both quite successful. A lot of times, both are related. People come to dine and they pop bottles, so a lot of times, we can't even separate it.

How late do you serve food?
We serve food until midnight every night.

What time of the night do things generally transform from dining to a party at Barcode?
DJs come on at 10 p.m. It's very nice and chill music at first and then at 11, the party starts.

What sort of big name clientele or guests have you had at the lounge?
We have all kinds of celebrities at Barcode. We get athletes, politicians, singers, actors. Some of the names we've had are Tiësto, Trey Songz was there for a brunch, David Guetta...

I saw that you offer a few different VIP packages on your menu. How often do those get ordered?
Very often. And it's not just the packages we list online. Sometimes we get requests for the whole VIP area. Or sometimes companies want to book the whole club for happy hour, special functions and other things like that.

How much does something like booking the VIP area cost?
It all depends on the date, time and the season. There's no set price. Obviously, a Saturday night will be more expensive than a Monday night.

What's one of the craziest requests you've gotten as a VIP host?
From drunk people you always get all kinds of request at the club. Two weeks ago, we had a customer spent a crazy amount of money on eight magnum bottles at a table.

How often do people order the $1,000 bottle package [four bottles of Belvedere Intense and two of Segura Viudas champagne] you offer?
Quite often because we have premium bottles but our prices compared to other places in D.C. are the best.

What's the most expensive party you've seen at Barcode?
A private party that was booked. Everything was included. Food, heavy hors d'oeuvres and a premium open bar booked for four hours. I don't want to give a number, but it was not terribly cheap.

Any crazy or interesting stories from your time at Barcode?
Well, crazy for me doesn't necessarily mean bad. I've seen many beautiful things happen that I'm proud of. Two months ago, my very good friend and my DJ proposed to his fiancé on the mic. It was a great moment.

What have you seen people do to try to get in to Barcode? Any bribes?
At Barcode, it's always free admission. But people have done all sorts of things to try and skip the line: dropping names that they know like the owner or manager. But the only way to skip the line is you have a reservation or a table.

When did you start your $5 Fireball Friday promotion and do you see people coming in specifically for that booze?
We started the promotion two months ago and we actually we serve quite a lot. A lot of people come just for it. It really works. People love Fireballs and five bucks is a great price.

What's the busiest night of the week at Barcode?
Both Friday and Saturday are very busy. We have DJs both of those nights.

At a prime time, let's say Friday or Saturday night during the summer, what's the average amount someone spends in the VIP section?
It's normal for people to spend $1,000-$2,000 at a VIP table on average. It's not unusual, happens all the time. That's usually a couple of bottles at a good table in the VIP area.

How about if someone wants to VIP it up on a budget, what's the best deal they can get on a table?
We have tables starting from $300 by the dance floor and then we have tables starting at $400 by the VIP area. People are always popping bottles by the patio, where there's no minimum. We have a beautiful patio where people can get a table and smoke the hookah. It's not unusual to see someone there with a bottle, hookah and their food. It's something you can't find at a lot of places.
For VIP service, Stephanos can be contacted at 202-955-9001 or stephanos@barcodedc.com.
—Jody Fellows
· Barcode [Official Site]
· All Previous Editions of The Ropes [-EDC-]