With its pit beef, crab cakes and crab boils, fudge-draped cookies, Polish sausages, and raw oysters crazily topped with slices of boiled egg, Baltimore has always been something of a foodie's paradise. But over the last few years, perhaps in emulation of bigger, glitzier cities, Baltimore has developed its own formidable collection of fashion-forward restaurants, from frankly expensive joints where you can order a nine-course prix fixe with science-chef flourishes, to mid-priced bistros with creative and ambitious chefs, to modest sandwich shops that piously list their locavoric suppliers by name. On a recent weekend visit, I eschewed such favorite haunts as Pioneer Pit Beef and Lexington Market to get a taste of Baltimore's evolving restaurant scene.

I partly focused on the Hampden neighborhood made famous by John Waters, a working class enclave now being threatened by high-rises and high rents, where a half-dozen well-regarded but rather pricey restaurants have located in the last three years.

As usual, I hit the ground running, dropping by a new place called Charcuterie — an offshoot of Corner BYOB, a bistro serving "refined peasant fare" that took over a former ramshackle diner on a busy corner of 36th Street, which locals refer to as The Avenue.

Charcuterie (850 B W. 36th St, 443-869-5075) occupies a white clapboard shed out back, dark inside but fully populated when I arrived around 11:30 from the Amtrak station. The room was decorated with rusty farm and logging implements apropos I'm not sure what, and seating was slapdash at small tables and barrels. Sausages and hams hung in one corner, where a giant of a man in a huge puffy Rasta hat prepared charcuterie plates featuring a choice of six cured meats. "Do you make your own charcuterie?" I asked him. "Not now, but someday we will," he answered sheepishly. At $13 for a generous plate of speck, Venetian soppresatta, and rosette de Lyon, garnished with eight condiments that included cornichons, pickled fennel, conserves, pepper-laced honey and spicy pineapple, the selection was a steal. 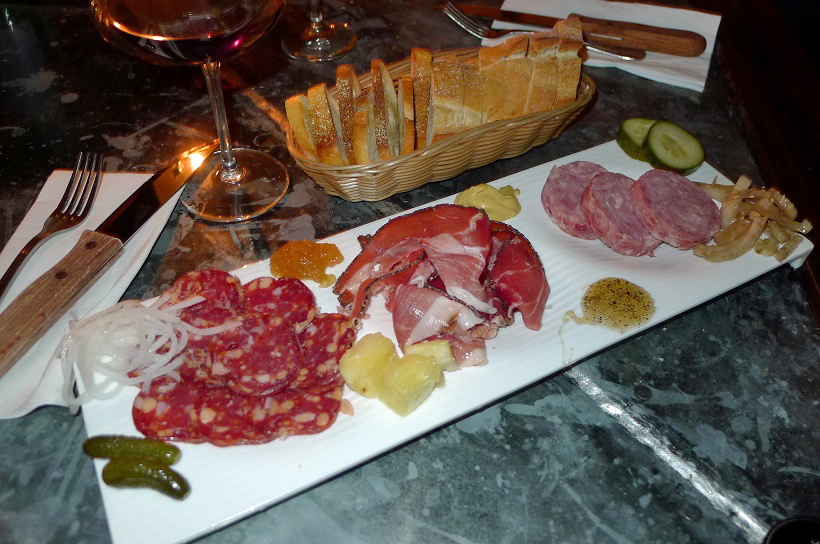 The bar offered tap and bottled beers, bottles of wine plus a single by-the-glass red and white, and cocktails, with a special mixed drink of the day discounted to $8. Nearly everyone seemed to be gulping it. In a neighborhood where most have already gone to bed by midnight, Charcuterie stays open till 2 a.m., which is a real boon to the city's night owls. In addition to meats and cheeses, the place offers such snacks as bone marrow, escargot, pig trotters, and beer mussels. My friend and I order the pig foot ($9), but the steaming mass proved too hard to dissect in the darkness.

Waking up on a damp Saturday just as the purple and orange crocuses were springing from the ground, I resolved to go to at least one of the two Baltimore semifinalists for this year's Beard award for Best Chef – Mid-Atlantic. My choices included Cindy Wolf at Charleston (1000 Lancaster St, 410-332-7373), a formal and very expensive prix-fixe-only refectory open since 1997 in the tourist-infested Inner Harbor, and Spike Gjerde at Woodberry Kitchen (2010 Clipper Park Rd, #126, 410-464-8000), a six-year old spot picturesquely located in an old mill in the Jones Falls gorge, not far from Hampden. Driven by a wood-burning oven and featuring local agricultural and Chesapeake Bay products, Woodberry Kitchen is wildly popular and Menupages showed no reservations available for weeks. Trying to call on the phone —which I did more than a dozen times — suggested one of the restaurant's crowd-control strategies is simply taking the phone off the hook. Nevertheless, I dropped by at 2:15 Saturday to find half-empty dining rooms, only to be told they stopped serving lunch at 2 pm, and there were no reservations or even drop-ins permitted that day or the next. Damn! 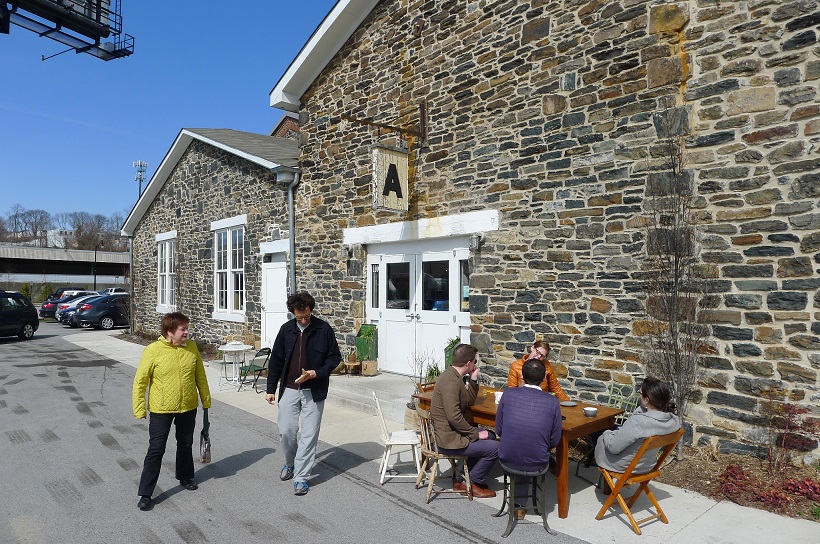 But some friends had spoken excitedly about a much newer and less annoying offshoot of Woodberry Kitchen called Artifact (1500 Union Ave, 410-235-1881) not far away, and I rushed over with two dining companions for at least a partial taste of what all the Woodberry excitement is about. Located in an early-19th century stone factory currently being rehabbed into a modern industrial park, and featuring several rustic seating areas, Artifact is partly French bakery, partly coffee bar (as we arrived, the place was a sea of glowing laptops), and partly small café, where a short but beguiling menu of soups, salads and sandwiches prevails.

The cup of potato soup ($4) with lardons and a slick of green parsley oil was a giant hit with us, and so was a vegan tofu banh mi with a nicely acidic and spicy kick to the dressing. Also in a Vietnamese vein, a bowl of peanut noodles ($9) with a julienne of pickled carrots and turnips and a crown of radish sprouts turned out to be not nearly as interesting as we'd hoped, till we doused it with some of Artifact's homemade Snake Oil hot sauce, which has a bit of welcome fishiness to it. 100% better! 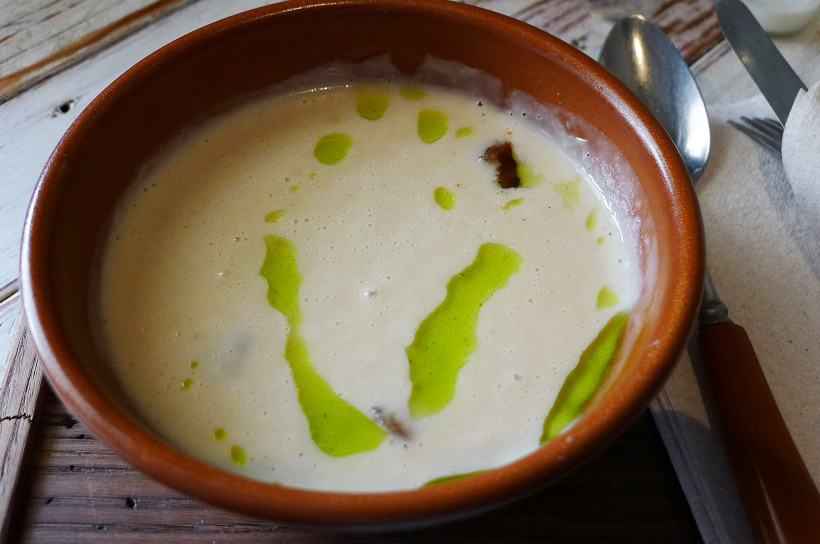 We grabbed a couple of excellent cookies on the way out. With its relative low prices, handsomely rustic dining rooms and friendly staff, this is a place you'd be very glad to find in your own neighborhood.

Already in binge mode, we were driving across town and crossing North Avenue when we spotted the leftist bookstore and coffee shop Red Emma's (30 W North Ave, 443-602-7611), and approached by nimbly stepping around a couple of what appeared to be meth addicts deep in the throes of a dispute that involved shaking umbrellas at each other. 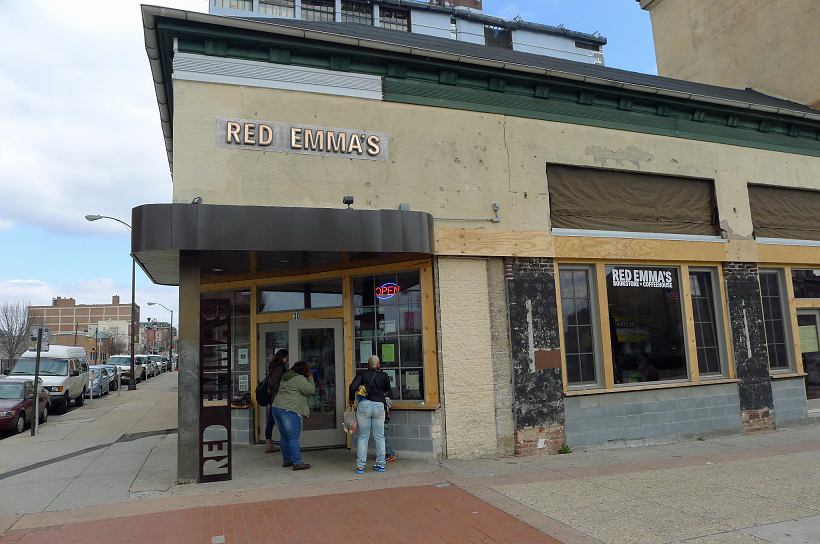 Inside, we found a very comfortable space with high ceilings that might have once been a department store. The coffee was excellent, the food mainly vegan, the crowd a perfect mixture of the very old, the very young, and everyone in between. 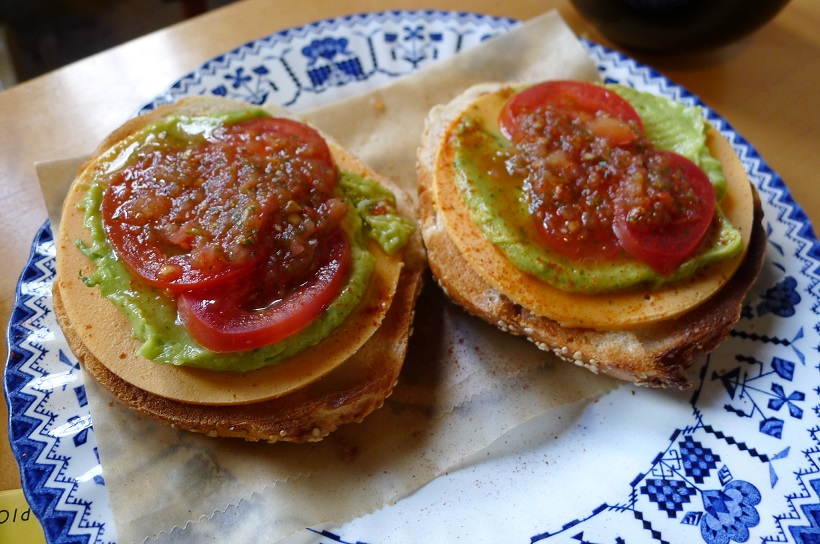 We were joined by a couple more friends among the mountains of books, some with alarming apocalyptic titles. Here we sampled another vegan banh mi ($4, for half) nearly the equal of Artifact's, though less delicate by virtue of its purple cabbage topping, plus an amazing bagel sandwich called Atzlan ($6). Amazing because it was made with orange soy cheese that managed to taste exactly like American cheese. And the guac was a nice addition. I would eat that sandwich again. Vegan cheese has clearly come a long way. You'd don't believe me? I don't blame you! 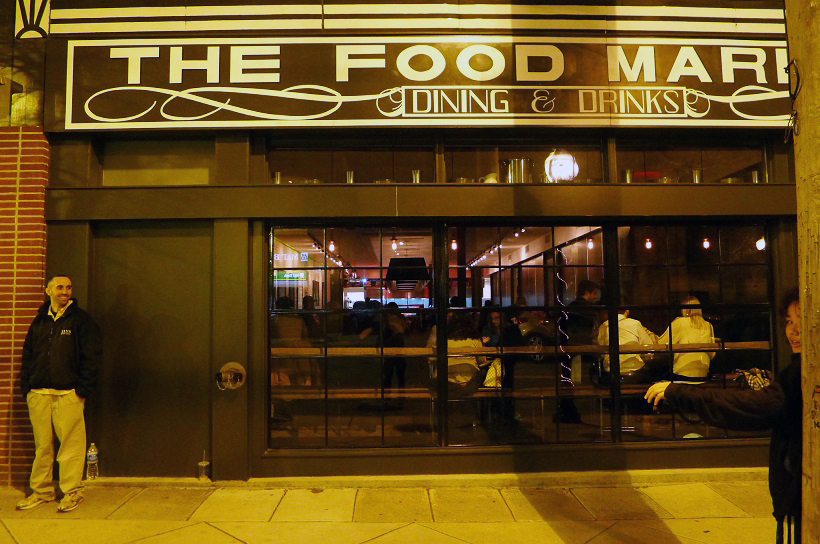 Having failed at shoehorning myself into Woodberry Kitchen, I'd resolved to eat at a big-ticket place in Hampden itself on Saturday night. After examining the menus at several, the one that attracted me most was The Food Market (1017 West 36th St, 410-366-0606), a sprawling restaurant right on The Avenue that has an unusual back story. As whispered to me by a long-time resident, the place used to be called Hampden Market, and it had ostensibly been an economically challenged food store. I say ostensibly because the high shelves had always been very sparsely stocked, according to my informant, "and there were many, many poker machines in back and other gambling opportunities," he drawled in the local dialect, in which "dog" is pronounced as "dug." In other words, the Hampden Market was once a front for a gambling operation. (It also appeared in the John Waters film "Pecker.")

Now the high-ceilinged space is crammed with tables, and the whitewashed walls plastered with indifferent art. Chef Chad Gauss — a heavyset guy, with tattooed arms and hair wrapped in a biker's bandanna — presides over an open kitchen at the end of the room. Two companions and I arrived early, around 6:30, to find the place nearly full. We were happily directed to a communal table for walk-ins right by the kitchen. The menu is big enough to occupy a folio-size sheet, both back and front, with extensive alcoholic suggestions on one side (I picked a cocktail called "Robert Frost," a gin-and-tonic variant made with lavender vodka and fresh rosemary), and food in five divisions according to size on the other.
In general, the food was great. Dressed asparagus ($9) was a pile of delicate spring specimens log-jammed in the middle of the plate sided with a couple of spears of grilled white asparagus and heaps of prosciutto. Grilled lamb porterhouses ($14) were less lushly sided — mainly with dried apricots and nuts, which caused us to yawn — but the meat was excellent, looking like four tiny bone-in steaks. While the crab cake entrée ($24) was on the skimpy side (it had no filler and no Old Bay seasoning, which might be a plus for some), its accompaniments, which included a dish of creamy pasta shells with lobster, and plain steamed broccoli, were tasty enough.
How could we not order something called the Pat LaFrieda Burger ($14), topped with diced bacon, cheese, and homemade pickles? It proved spectacular, juicy and red, though it made a friend from the neighborhood angry. He noted, "We have plenty of great butchers here using local free-range meat. Why kiss New York's ass?" 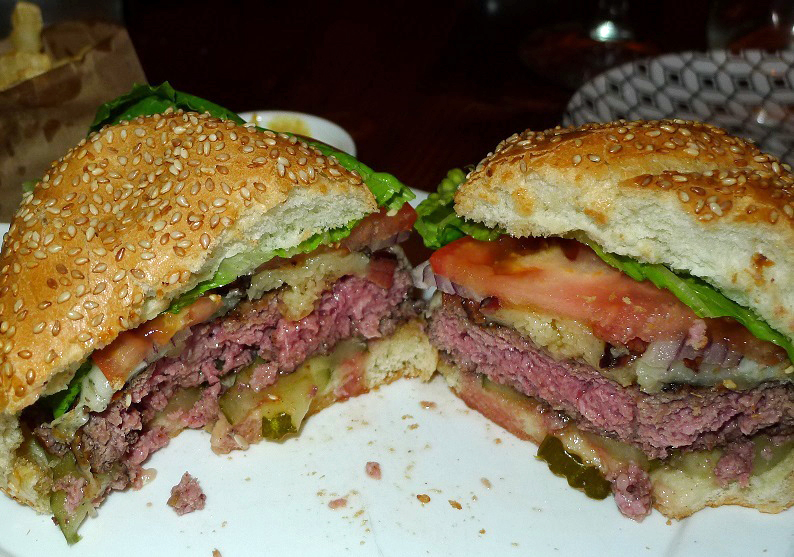 Other dishes we enjoyed included brown-sugar-crusted pork belly served with a salad of greens and pecans; and something facetiously called "boring Caesar salad," which was exactly what you'd expect, with plenty of grated cheese, but seemingly deprived of its anchovies. Hence the "boring" part, I guess. 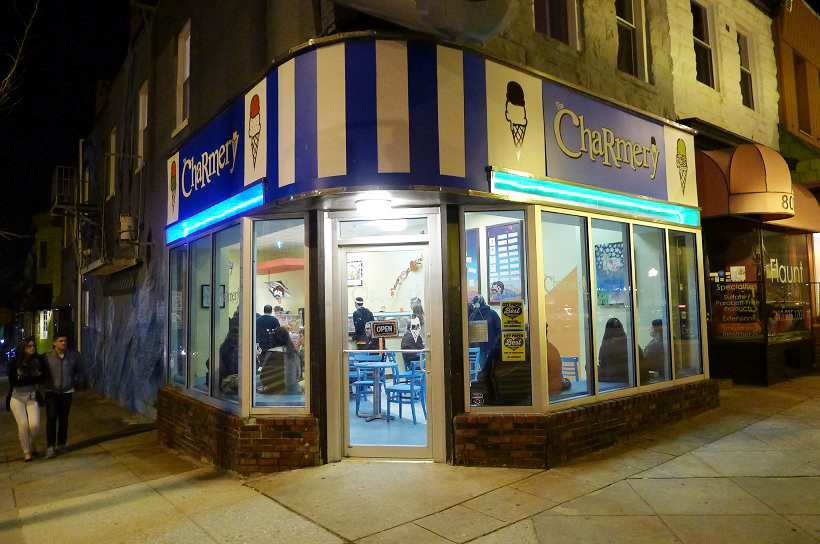 Afterwards, we ran down the street to Charmery (801 W 36th St, 410-814-0493) the neighborhood's new ice cream parlor at the corner of Chestnut Avenue, where half the local populace seemed to be camped out. Still smarting from the crab cake's lack of Old Bay — Baltimore's signature spice — I ordered a scoop of Old Bay salted caramel ice cream — which tasted much better than it sounded. In fact, the ice cream at Charmery was very much in the style of San Francisco's By-Rite, and every bit as good. A friend had a scoop of Berger's Cookies, name checking the fudge-encrusted cakes that are Baltimore's favorite baked goods. 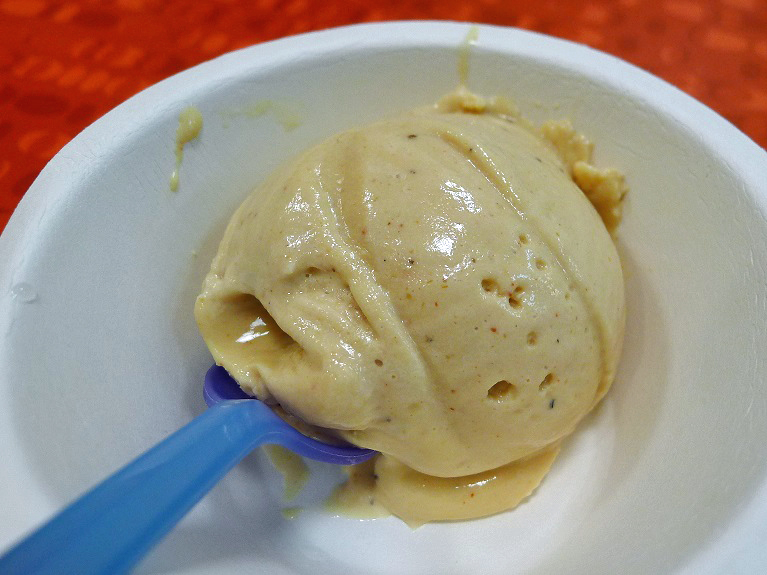 All weekend, we kept our eyes peeled for one of the Gypsy Queen food trucks, but it wasn't until Sunday morning that we finally ran into one. 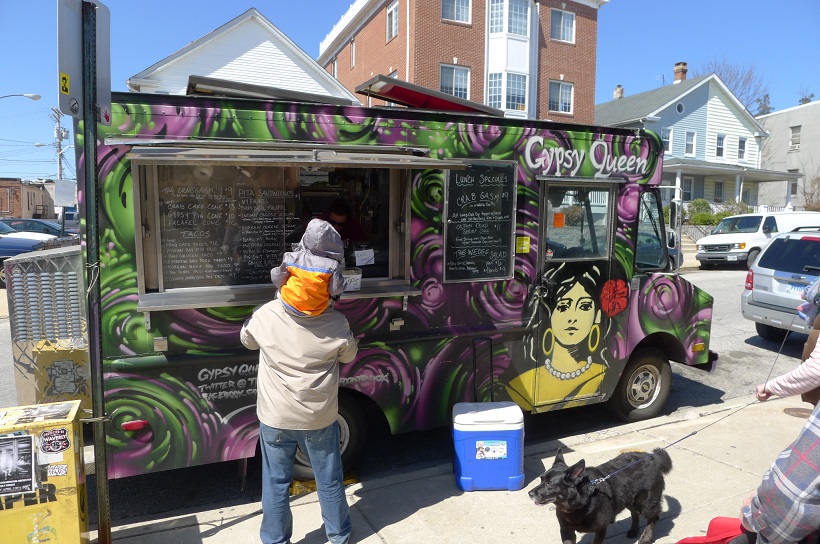 There we purchased what has become Baltimore's most notorious street snack, the crab cake cone ($13). Ensconced in a large waffle cone, of the kind you pay extra for in ice cream parlors, it featured french fries dusted with Old Bay and crushed garlic, topped with a crab cake bigger than the one we'd eaten at Food Market. The whole thing arrives sluiced with a runny flavored mayo that tastes like it contains, among other things, chipotle peppers and minced kale. 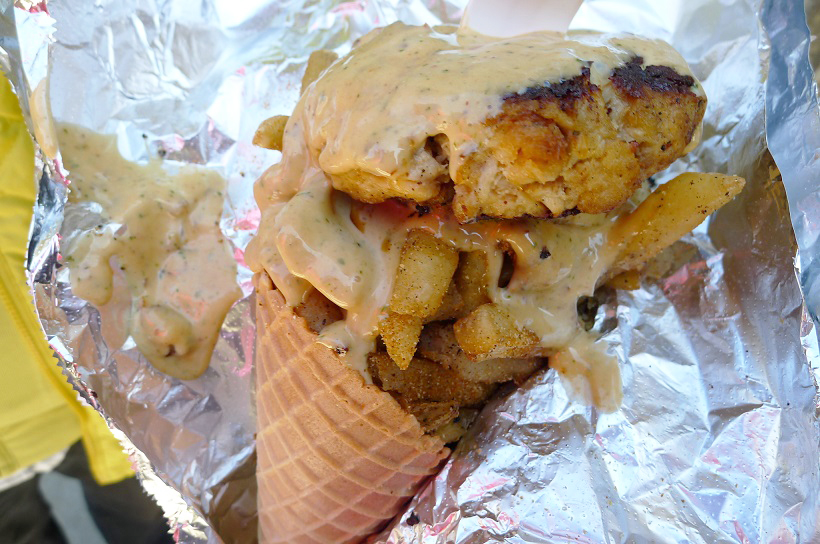 "What does it really have in it?" I asked incredulously. The fry cook smiled and shot back, with a sense of humor befitting a John Waters character: "It's a secret, you nitwit. If I told you I'd have to kill you!" The crab cake cone was very, very delicious. And with that we left Baltimore, resolving to come back soon — and not only for the food.
—Robert Sietsema
· All Previous Baltimore Coverage [-EDC-]