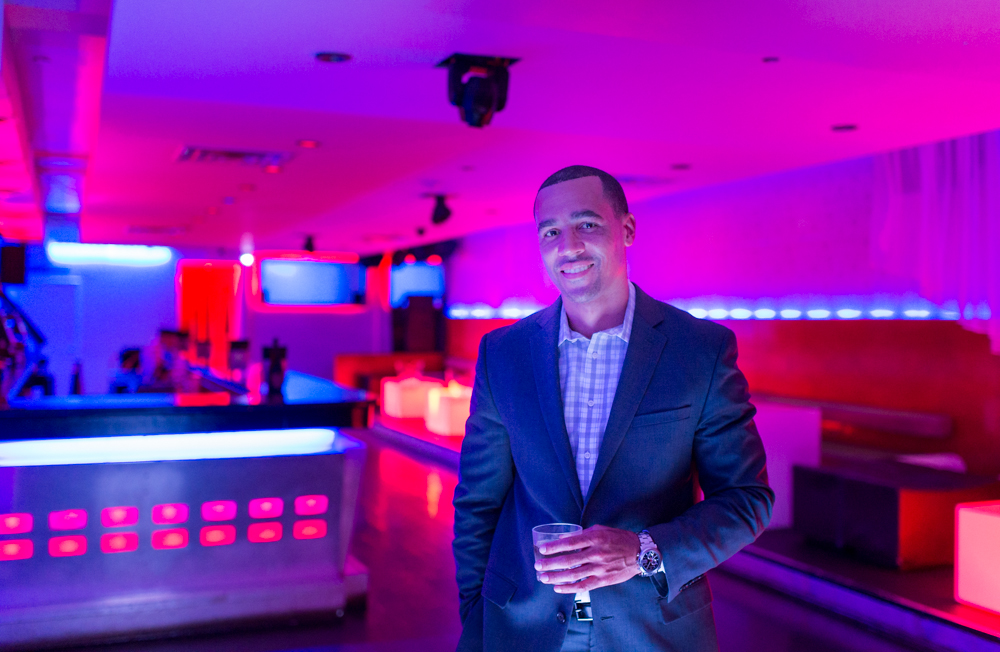 Jay Sutton is a veteran of the D.C. club scene, having spent time working at Republic Gardens, Dream and Love before arriving at his current employer, Ultrabar, almost seven years ago. As the general manager, Sutton oversees the Chinatown nightclub's five floors, six full bars, four DJ booths and bottle service at 25 VIP tables. In this installment of the The Ropes, Sutton tells Eater about celebrity clients, rope jumpers and the most memorable night of the year at the club.

How long have you been at Ultrabar?
Six and a half years.

What's your background in the industry?
About 14 years ago, I went to a bartending school looking for a way to make some money on the side and I picked up a job at, what was at the time, Republic Gardens, and then I segued over to Dream nightclub which became Love. As I went along, I started bartending for Ultrabar and about three years ago, became the general manager.

Are you originally from the D.C. area?
Yes, born and raised. D.C. birth certificate. I spent most of my upbringing in parts of Maryland.

A true Washingtonian.
One of the few. Or at least I can claim it by birth certificate.

How often do you see regular VIP clients at Ultrabar?
Every weekend. We've been around for a while and we have a very loyal customer base. It's a unique experience at Ultrabar and I think that's what people come out for. We have a little bit of something for everybody. Being that everybody is there to have a good time, we get frequent regulars. We have people that are there, waiting in line, literally every Friday and Saturday for the past couple of years.

What are some of the big names you've had at the club?
Not to be too specific on the athletes, but we get Washington Redskins in there, the Nationals players come in...we get the Wizards from time to time. Some of the Capitals as well. Ovechkin tends to frequent Ultrabar. And then on a more grand scale, as far as entertainers go, we've had Tracy Morgan come and get a table, Michael Jordan at one point, Mario Van Peebles, Matthew McConaughey. We've had an assortment.

When you get those type of big clients in the club, how do you take care of them? Do you have a go-to area or section for them?
Yeah, we have five levels and 25 tables. And we usually designate the mezzanine level, which overlooks the main floor, as a place we section off for those next-tier VIPs. People that want a little privacy but also want the ability to have others join the party if they like. So we use that area, we rope it off, we station some security personnel at the entrance. We pretty much give them exclusive rights to that space.

Of the club's five levels, what's your favorite?
I have to say the main floor. It's just that the ambiance is right, the lighting is right. We have a great DJ booth that's the focal point of the floor so all of the attention is towards how the party is generated. And there's a nice mix of music on the main floor.

Is there a popular VIP package ordered at Ultrabar or is it mostly bottle-by-bottle?
We do have some packages that we put together. We label them as birthday/bachelorette packages, for those people who are celebrating a special day or event for themselves. We may do something like three bottles for $300. Something that really spices things up for the individual and makes them feel special but also not cost prohibitive. It's all about the customer experience. So we'll move pricing around and things like that, to really make them feel like not only did they get what they wanted, but they got it the way that they wanted.

If money is no object, what's the most expensive item can someone order at Ultrabar?
We've seen people spend $1,000 on an Ace of Spades bottle and then order two or three at a time. It also get to a point where people will buy a lot of bottles of [Johnnie Walker] Blue Label. All these bottles are upwards of $600-700. Cristal was a hot commodity for a while. What's surprising is seeing people order those bottles in bulk when they're really out to spend. They'll get four, five or six of those in one sitting.

What's the most affordable bottle that you sell?
Moet White Star or Imperial. We sell that at $100 at a bottle.

In your six-and-a-half years at Ultrabar, what's the most extreme request you've had at the club?
On those demand-filled nights when we're sold out and people really want to be inside and have some space, we've had offers to buyout whole floors at a premium, up to five times the price of what we normally sell them for. Obviously, our commitment is to the customer experience so we can't shortcut somebody regardless of what's being offered.
As an individual, people have said "Well, what if I gave you this?" and those numbers can be a little extreme and crazy as well. You just kind of laugh it off in the end and apologize for the fact that we are sold out, but we'll certainly take care of them in the future if they want a table in advance.

I take it they don't get very far if they try to jump the rope.
[Laughs] No, they don't get very far. We're well-staffed with security. One thing about Ultrabar is it is a very safe and enjoyable experience. We don't have a lot of incidents. We have a great staff in place. So, no they don't take many steps before we're able to get them to snap back into what's going on.

Is there anything someone can do to get in quicker if there is a line?
Sure, being that we have 25 tables, there are opportunities for people in line who want to move to the front and get inside. Getting a table will push you ahead. We have no lines for tables. We do everything we can to make sure they have the complete experience. Also, if we have anyone with any special events, a bachelorette party or birthday, we'll move them to the front of the line as well and not charge them a cover to get into the club.

Throughout your years at the club, what's the craziest thing you've seen? Anything specific?
[Laughs] Ahh yeah, some of which I can't disclose. [Laughs] You get people from all walks of life with all different cultural experiences, so I'll just leave it at this: there is little that I can now see in my life that would surprise me based on my working experience in the nightclub world.

What has been the best night you've seen at Ultrabar? Any night that stands out from all the others?
I'd say our Halloween experience, year in and year out, tend to be the most memorable ones. And not just for the fact that it seems to be the biggest party night of the year. The demand is so high, we have to stop letting people in on Halloween typically. But also, the outfits and the energy the comes with it. Especially the past two or three have been very memorable.

What's the most popular night of the week at Ultrabar?
Saturdays tend to the most popular. It's just more of a party night. People can be sure when they come out Saturday they're going to get the experience they're looking for. I think that's the consistency factor and customer experience factor that we strive for.

Arrangements for tables or other special events at Ultrabar can be made by calling 202-638-4663 or visiting ultrabardc.com.
· Ultrabar [Official Site]
· All Previous Editions of The Ropes [-EDC-]
—Jody Fellows