Bart Vandaele on B Too's Challenges and Milestones

Share All sharing options for: Bart Vandaele on B Too's Challenges and Milestones 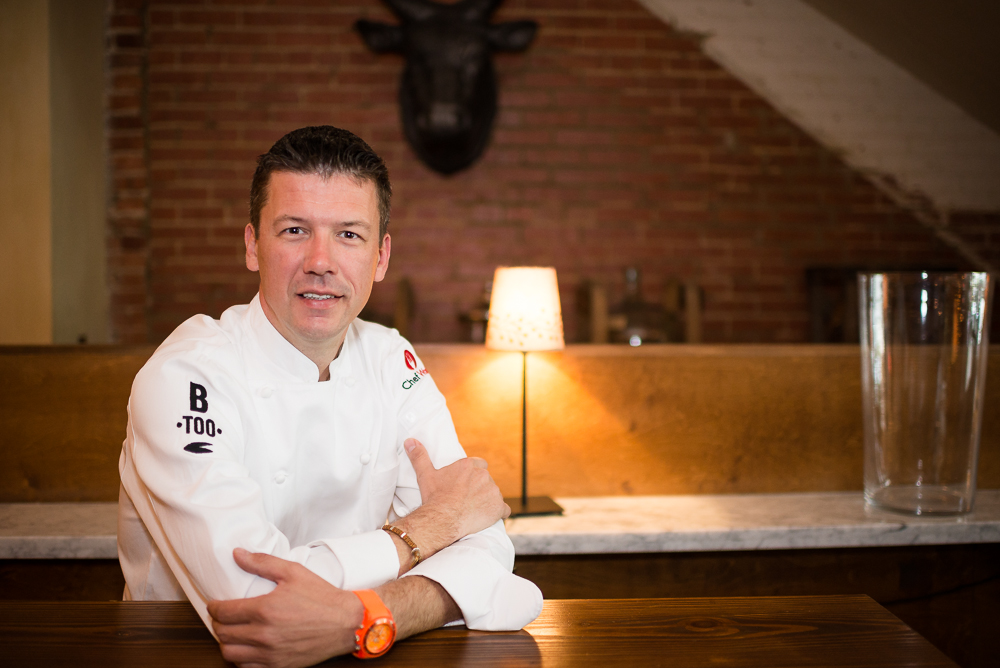 Bart Vandaele at B Too [Photo: R. Lopez]

This year is a big year indeed for the former Top Chef contestant Chef Bart Vandaele. His B Too restaurant turns one, Belga Cafe hits a decade and the chef himself turns 44. In 2004, Vandaele took his love and appreciation of Belgian cuisine — which is more than mussels and waffles — to Barracks Row. Then nine years later, he crossed North Capitol Street to bring Belgian cuisine to the 14th Street masses.

But the move from SE to NW is not without its issues. Vandaele is learning the neighborhood crowds along Barracks Row are very different from the seen-and-be-seen weekend eaters on 14th Street. And getting a restaurant up and running in a construction zone doesn't help either. Plus, as the chef gets older, he finds his staff gets younger and working with younger people presents its own challenges. However, nonplussed by 14th Street culinary whimsies, generation whatever we are and constant construction dust, Chef Vandaele is "sticking to his guns" and is betting long on his B Too space with a 20 year lease just south of Rhode Island Avenue.

Vandaele, who has also been knighted by the Order of Leopold II, isn't worried about not being the hippest destination on 14th Street. Sure, Waffles are hip again with waffle tacos and waffle sandwiches and other waffle bastardizations. But being hip falls out of fashion, and Chef Vandaele isn't chasing after trends. So even when waffles are "out", B Too will have them.

Congrats on one year for B Too and ten years for Belga. You must be happy to be hitting those milestones.
Yes, one and ten. It feels like twenty years sometimes. But yeah, I opened B Too on my birthday. And not from planning. It was the date that happened to work. It was a Tuesday. And it just happened.

What kind of curveballs did you have over the last year?
I'm very happy with what happened, but at the same time, kind of disappointed. We have construction on one side. It's a bit difficult to measure what we accomplished and what we didn't. Personally, I'm satisfied where we are at the moment. Can it be better? Always. Otherwise I wouldn't be working everyday. I would sit back and relax.

How could it be better?
It always can be better. It can be better managed and better food and better service. There's always something that can be done better. I rely on 80 people to execute what I envision or dream of or not sleep at all. But maybe getting on some major guides or in some newspapers to finally recognize me. I know a lot of restaurants have opened up, but I'm not such a small fish anymore in this pond.

Do you spend more of your time at B too or Belga Cafe?
I spend more of my time here. I have more of an oiled crew at Belga who knows what I want. Some of them have even been with me for ten years. So that definitely goes really well.

Last May, there were a lot of big restaurants that opened — Le Diplomate, Etto, and Ghibellina to name a few. How has the opening flurry of last year changed this year?
I think it's going to stabilize a little bit. There's more residential units coming up. So that will help us out. And I signed a lease for 20 years, so I'm not going to move.

So you're betting long on this space.
I bet long. I'm not a sprinter. I still think that after ten years at Belga, I'm not done yet. There's always something changing: more competition, less competition, different competition, new trends. I don't want to jump on everything. I stick with what I know best and what I believe in. The belief is definitely a big part of it. Is it different? Absolutely. Is it the newest trend? Probably not. Belgium has been there for a while, so I stand on my values. I've been doing this personally for about 32 years.

Were you apprehensive about how 14th Street diners would receive Belgian food?
I think the food was already approachable. Is 14th Street a little bit different than 8th Street [SE]? Probably. But in the beginning, I thought I had to do things different because it was 14th Street. And I changed my mind after a while, so I could stick with what I believed in and what my goals are. Are we the hip place? We're trending.

How has the menu changed since opening?
The waffles became a really big concept again. They are trendy again. Chicken and waffles. Waffle tacos. Waffle sandwiches. Waffles, waffles, waffles. But I've been doing this for years. At Belga, we did foie gras and waffles since the second menu.

What other differences are there between your experiences at Belga and B Too?
Are we working with a completely different crew than when I opened Belga? Absolutely. Is it a different mindset with the younger crowd I have to work with? Absolutely. So those things are changing a little bit. Some people think the new way is the way to go. Some thing the old way is the way to go.

You seem to prefer the older way.
Not the older way. Let's say the "established" way. It's been proven. The battles have been fought before. Yes, there are new ways that work amazingly, like for Google. But this is a restaurant. It's not a tech startup. We've been going to restaurants and taverns for ages.

Speaking of taverns, let's talk about B Too's beer list.
We have 150 to 200 beers depending on the season. It depends on what we can get our hands on. We have our spring beers, so we are prompting the fresh hoppiness, the saisons. And in the wintertime, we have all those Christmas beers — rich, creamy, fully of flavor. But I'm really into the B Too ale. It's something we worked on before we opened. It's a lager that has some hoppiness and freshness with a low enough alcohol that you can enjoy a few of those.

And you guys introduced a late night menu.
Yeah, we introduced a late night menu. That starts to go little by little. Our breakfast is going amazing. Some days it's slow and other days it's very busy. Do I want to give up? No. Probably before I change something or scrap something, it'll be another year until I have another full year under my belt. Maybe the construction next door is gone. People are still learning about what we do. They sometimes don't know we do breakfast. You can't get everything open at once. It's building little by little. And letting them come back. Getting that repeat business. This is what I want to create. It's never done.

Could B Too be replicated in another neighborhood or is B Too a good restaurant for where it's at?
I think B Too and Belga could be replicated. But it probably will not happen in the near future.

What would you like to do differently?
Sometimes I wish I could close for a month and start over. Take everything out. Paint everything. Freshen everything up. But really, you can only do section by section. It's a work in progress.
· All Previous B Too Coverage [-EDC-]
·; All Previous Editions of One Year In [-EDC-]