Cafe Mozart, A German Restaurant Bought on a Whim

Share All sharing options for: Cafe Mozart, A German Restaurant Bought on a Whim

Welcome back to Still Standing, where Eater looks at those bars and restaurants that have quietly stood the test of time over the years, despite the city's changing restaurant scene. From dive bars to neighborhood joints to under-the-radar haunts, these places rely on word of mouth and loyal regulars rather than splash and publicity to keep on going. Have a suggestion for a future place to feature? Tell the tipline. 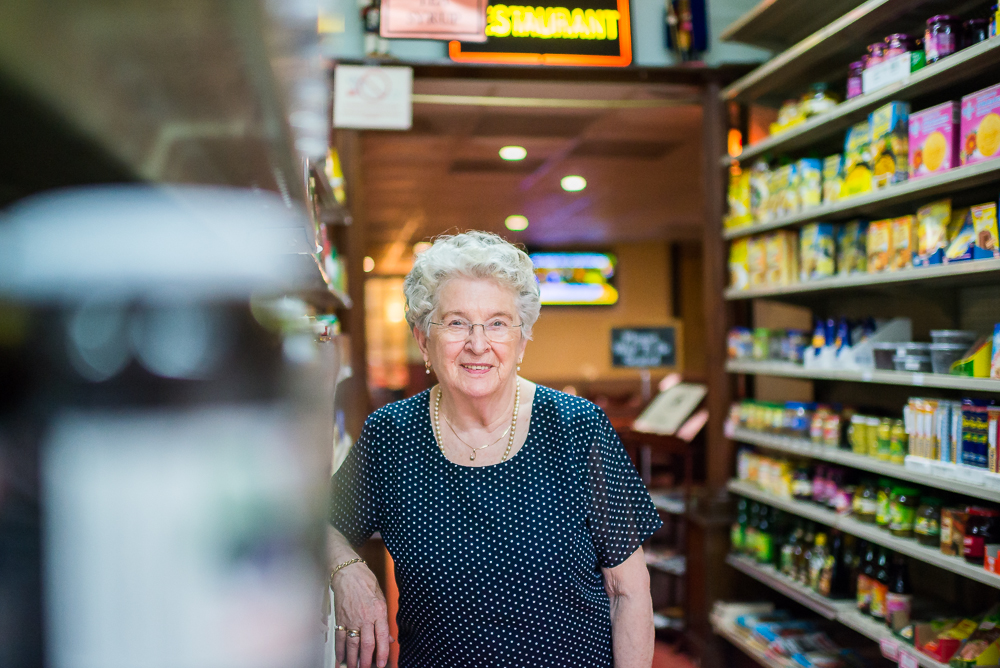 One day in 1964, Hildegard Fehr entered the German Deli in D.C. as a customer in search of knockwurst. Not an hour later, she left the store as its new owner.

At that point, the deli, which is now connected with Cafe Mozart at 13th and H streets NW, was a few blocks away and a stand-alone store selling meats and cheeses. As Fehr shopped, the female owner vented about a goofed-up order. "She said, 'I can't take this anymore. Do you want this store? You can have it,"' Fehr recalls. "I said, 'I'll take it. But I don't have any money.' So, whatever change I had, I gave her as a down payment. Then the next day I came back and gave her more money. My husband almost had a heart attack when I told him I'd bought the store."

Austrian-born Fehr, who is now 82, came to the United States during the 1950s on a three-year contract to cook for the German Embassy. Previously she'd been trained in her homeland's equivalent of hospitality management and prepared meals for a British boarding school. Given her culinary background, she planned to spend her career solely doing the cooking, not taking over a deli. And she says she certainly didn't imagine that by 1982 she'd open an adjacent German restaurant.

Spontaneity has seemingly paid off. The combination of the German Deli and Cafe Mozart have been going strong for decades with no plans of closing, even as Fehr tries to ease into retirement.

Early on, though, the deli struggled. Fehr and her husband had just bought a house, which left them with little working capital for their new business. To even order sausages and other foods to sell to customers, Fehr persuaded her suppliers to give her three months to pay them back. They did and she still buys from these vendors, albeit no longer on credit.

By the late 1970s, Fehr and her husband began thinking about selling the deli to travel the country in a mobile home. Before they had the opportunity to, they learned the entire building had been sold. The bank was prepared to give Fehr just $20,000, but she protested that to fix the plumbing and electric alone would cost double that. So a loan officer took a chance on the couple and gave them $80,000, telling them that if they didn't make the money back he'd lose his job. He, too, is someone Fehr maintains contact with to this day.

The next problem Fehr encountered was finding a new location. Her accountant located one available space: the former base of operations for the University of the District of Columbia. Fehr was to use the back, formerly the school's cafeteria. The front of the space was, at one point, UDC's library, and maintenance staff kept an office. So customers, during various periods, went through the alley to come inside and purchase food. As Fehr managed to secure a larger swath of the building, she soon realized that she'd need to do more than reopen the deli; so she made plans to open a restaurant and hopefully turn a greater profit.

Fehr remembers that I street, in the early 1980s, was overwhelmingly occupied by flower wholesalers. The only other businesses around were seedy nightclubs and a pawn shop, and prostitutes hung around the vicinity. "It really was a bad neighborhood, but I was so grateful to find anything," the owner says.Inside the space, too, conditions were unsanitary and dirty, Fehr says. Removing ceiling tiles, they'd find debris and rat skeletons, which is why it took months to clean up and remodel.

By January 1982, Cafe Mozart debuted. The initial menu consisted of a few German staples like goulash, sausages and schnitzel. Since Fehr was trained in this type of cuisine it made sense to go in a German direction. The owner also wanted to stick with the name German Deli for the whole operation but was quickly told that was a no-no.

"I asked my suppliers if they had decorations I could use. One responded, and he was from the main meat seller that we use, Mozart. It's very famous in Europe," she says. "He sent me violins and red roses and pictures that I put on the walls. So when they asked me for another name, I just said Cafe Mozart." Once the name was solidified, "I was, more or less, handicapped on the menu, because any Cafe Mozart has to have certain items like a pork roast," she adds.

Who were the first customers? Fehr says she has no idea, because her time was spent in the kitchen preparing dishes. Newly opened, however, Cafe Mozart received a rave review by The Washington Times' food editor. The positive press brought attention and, just as quickly, crippled the business.

"Before that, we had about 40-45 people at lunch and 30 at dinner," she says. "After that article we'd get 250 at lunch and 180-190 at dinner...Just trying to feed that amount of people and wait on them and accommodate them, it was just impossible to have any kind of management. I think, for the next year and a half, we didn't make any money at all."

Digging out of this hole was practically a master class in restaurant management, Fehr says. She hired seven waiters, refused reservations and packed customers into the cramped dining room. "We had long tables, and people sitting on top of each other," she says. "Servers couldn't get through to drop off the food, so customers had to hand the food down a line. But they kept on coming, kept on coming, kept on coming. It took almost four years, but we got to a level where we started to know what we were doing."

Music, soon, became a regular part of the atmosphere at Cafe Mozart, especially to spur patrons to dine in the evening. The restaurant hosted opera nights, showcased pianists from Vienna and Sri Lanka and now has a German woman who plays the accordion four nights a week for tables.

The other constant became the staff. Fehr's first-ever employee, Farooq Ahmad, is now a co-owner. Fehr's accountant, as she readied the business for the public, actually sent another Pakistani countryman to assist Fehr. "After the first day, that guy said, 'This job isn't for me. I'm no worker. I'm good in the office. I can do anything for you there, but washing ceiling tiles is not me. I'll send you my friend.'" Fehr says. "That was Farooq, and he's been here since."

Other employees have worked in the deli and restaurant for decades. Mozart's current bartender, for one, has been serving beers and wines for 15 years and is 80 years old. Prior bartenders have died. The only staff that changes constantly is the wait staff, Fehr says.

While loyal customers have been stopping in for some time, one of the bigger changes as of late has been the customer mix. Fehr says during the 1980s and 1990s mostly seniors stopped in for meals. Now, the wide selection of German beers and the authentic German dishes is bringing a new clientele of younger patrons. "We have an awful lot between 20 and 30, which makes me happy," she says. "We hear that they're coming because of the food. Happy hour is mostly about beer. We should be more focused on wine, but we're a real beer place, and that helps too."

In terms of the food, the menu is still very traditional, yet it's expanded a great deal. Along with the original offerings, Fehr has added fish-focused dishes, sauerkraut and German pastries like strudel. In addition to veal schnitzel there's now pork, chicken, beef and mushroom varieties of strudel to enjoy the breaded cutlets in any protein form.

The biggest culinary challenge has always been finding chefs to tackle this growing selection of food. That's why until the hiring of the current head chef 18 years ago, Fehr was mostly fulfilling the role herself. "I had one (candidate) come in. I asked him if he was to cook our dishes, how he'd do it and he said, 'What do you mean?'" she says. "'We cook everything from scratch,' I told him. He looked at me like I came from the moon. He was used to microwaving. 'I'm telling you, I'm a very good defroster,' he said." That man didn't get the job. Another cook who did make the cut, after just two weeks, walked off with Fehr's prized cookbook and knife and was never heard from again.

But even with these kitchen dramas, the food and the "feeling that people have" when they dine at Cafe Mozart is why the restaurant and deli have remained, the owner says.

"Five, six years ago when food got so expensive I had customers tell me, 'If you need more money, raise your prices. We don't want anything to happen to you. Raise your prices.'" Fehr says. "For me, it showed that they really cared about us. Eventually, we added a quarter here and a dime there...We try to look, when we buy something, that it's the food quality we want at a reasonable price. There's a lot of work involved in doing that. But I think it's what people appreciate."
—Dena Levitz
· Cafe Mozart [Official Site]
· All Previous Editions of Still Standing [-EDC-]